Did Jesus really have a wife? 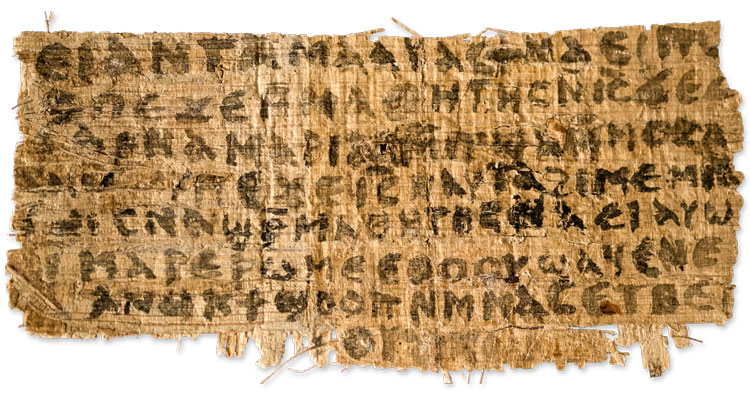 What you are looking at above is a 1,600-year-old piece of papyrus that was written in Coptic. A New York Times’ article on it set off speculation on whether or not Jesus was married:

A historian of early Christianity at Harvard Divinity School has identified a scrap of papyrus that she says was written in Coptic in the fourth century and contains a phrase never seen in any piece of Scripture: “Jesus said to them, ‘My wife …’”The faded papyrus fragment is smaller than a business card, with eight lines on one side, in black ink legible under a magnifying glass. Just below the line about Jesus having a wife, the papyrus includes a second provocative clause that purportedly says, “she will be able to be my disciple.”

Hold on there all you Dan Brown fans, don’t get too excited. There’s more to the story.

The Smithsonian Magazine has a lengthy back story on the papyrus and the scholar who discovered it. I highly suggest you read it when you have the time. The papyrus looks to be authentic, meaning that it is not a modern forgery. And, the Smithsonian Channel will premiere a special documentary about the discovery on September 30 at 8 p.m. ET

So the question remains, could have Jesus been married? Sure. Is it likely he was married?

No. There just is not enough evidence to prove it.

The credibility of such a claim is drastically reduced because of the date of writing: 300-350 years after the Gospels were written. Unless earlier manuscripts can be found, this is just an interesting fragment. True, it is possible. But the explicit evidence is just not there. It’s clear it was written after the Gospels during a time of Gnostic Christian thought – misguided Gnostic Christian thought. Gnostics believed some wacky ideas that were considered to be heretical. Namely, that Jesus wasn’t fully divine and human, that one must find the hidden meaning to Christ’s teaching in order to truly understand, and many gods exist.

The Harvard scholar who is behind the discovery, Karen King, says:

Other “gospels” were written before and during this time period.  Many of which tried to portray Jesus and his teaching in a different light. The Gospel of Mary, The Gospel of Judas, and many others write of a theology and narrative of Jesus that conflict with the orthodox history of Christ.

Why make such a fuss about debunking this Jesus story? People really believe these stories. Read some blogs and books from authors who believe the Catholic church is covering up the Gospel of Judas. Those folks are serious!

In the end, I’m not really concerned about such “new” evidence, but it is important to distinguish fact from myth.

Maybe seminaries should offer a class in mergers and acquisitions