Unless you have been sleeping under a rock, our government is at a budget impasse and everyone is mad as hell. Senate Chaplain Barry Black, a retired Navy rear admiral, gave a Senate prayer that the  New York Times reported as “scolding”:

The disapproval comes from angry constituents, baffled party elders and colleagues on the other side of the Capitol. But nowhere have senators found criticism more personal or immediate than right inside their own chamber every morning when the chaplain delivers the opening prayer.

The New York Times entitled the article, “Give Us This Day, Our Daily Senate Scolding” – written by Jeremy W. Peters — highlighted Rev. Black’s prayer as some sort of religious finger shaking.  When you read and watch the prayer, one immediately can connect to the honesty of the situation:

Save us from the madness…We acknowledge our transgressions, our shortcomings, our smugness, our selfishness and our pride… Deliver us from the hypocrisy of attempting to sound reasonable while being unreasonable… Remove from them that stubborn pride which imagines itself to be above and beyond criticism. Forgive them the blunders they have committed.

Many may not know that both the upper and lower house of our national legislature have chaplains that are nominated and approved. They hold prayer groups, visit sick legislative staff and representatives, and council leaders through personal difficulty. Chaplains offer prayer each morning. Set aside whether or not you think it is illegal for a prayer to be said before the day in the House and Senate, the New York Times takes Rev. Black’s prayer as punishing.

Religiously, spiritual leaders take the responsibility of leading people through good times and bad. Rev. Black’s prayer was the confession of shortcomings, asking for guidance, and seeking the common good. Seems that the New York Times does not understand the nature of spiritual leaders taking spiritual responsibility for guiding people. Rev. Black was praying what everyone was thinking: our leaders have failed us and we need to do better. That’s honest prayer. 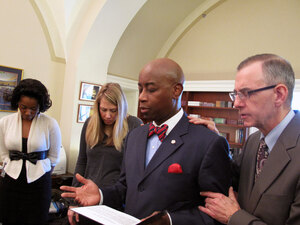 As a pastor, it is not very en vogue for us to call out transgressions in our community. We ministers as have lost respect in the wake of national scandals. It is rare for a religious leader to take responsibility and to publicly pray for forgiveness and restoration.

Prayer in the Bible is full of hard, honest expressions of lament, anger, and sadness. God’s people had a hard time seeing their transgressions. Prophets were called to bring transgressions to light. They in turn were unpopular, run out of town, or even suffered personal danger. Praying in times of tension, admitting wrong doing, allows for healing to take place.

It’s hard to hear the truth sometimes, especially when it comes from a religious leader. I’ve met Rev. Berry Black. He’s a no-nonsense guy, but is genuinely commitment to the work of God and the common good.

What I heard from Rev. Black’s prayer was honesty, truth, compassion, and a spirit of restoration. Jeremy W. Peters at the New York Times doesn’t see it that way. Mr. Peters may not like it, but we need leaders to say, “Enough!” In the sea of madness, Rev. Black is standing up and saying, “Let us stop this.”