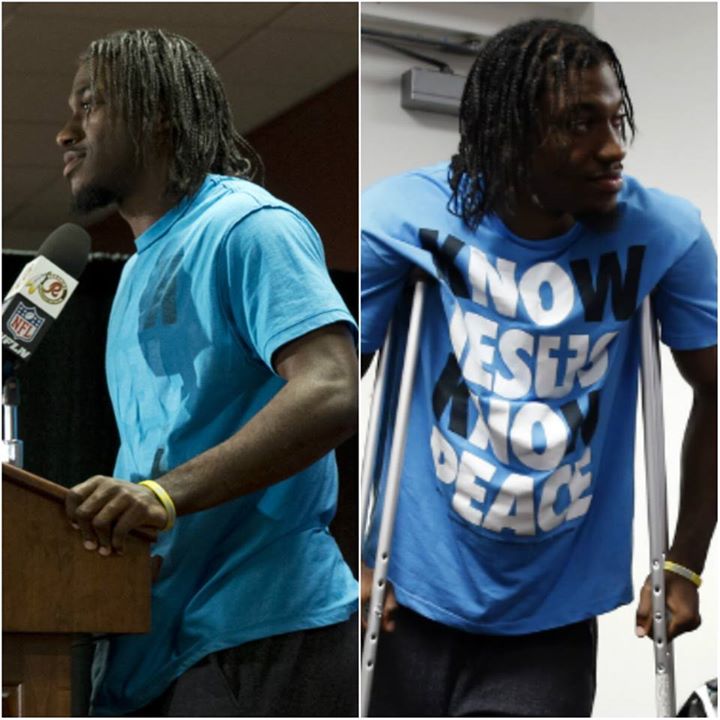 There’s a big uproar over Robert Griffin III reversing his shirt inside out at a press conference. RG3’s shirt read, “Know Jesus Know Peace” or “No Jesus No Peace”. (Cool play on words there.)

Over at Fox News, they are creating a controversy. On the Fox and Friends Facebook page, they posted the above picture with the text:

Out of Bounds! At a post-game press conference, Washington Redskins’ quarterback Robert Griffin III was told to turn his shirt inside out before speaking to reporters! Do you think he should have been allowed to wear his shirt as-is?

Of course, the implication here is that RG3 was not allowed to wear his Jesus t-shirt because it was religious in nature. Fox News has a history of creating the idea that Christianity is being persecuted in America.

If Fox News wanted to do some reporting, they would have found the following:

RGIII was wearing a “Know Jesus Know Peace” shirt. He was not asked to turn the shirt inside-out because of its religious message.

The NFL has rules governing what players can wear. Those apply to all players and all shirts, not just religious ones.

This is not the first time RG3 had problems with wearing non-approved apparel. He was fined $10,000 for wearing Adidas.  In addition, Sports Illustrated cited another reason why RG3 was changed his shirt:

Another reason for the reversal, however, could have been the NFL’s bylaw against clothing with “personal messaging.”  According to Finlay, who cited NFL bylaws, players are not allowed to wear shirts promoting a personal message during, before or after game days.

The problem here is that Fox News has a history of this type of narrative: Let’s get up in arms because Christians can’t be Christians any more. That is simply not true. As a Christian and a pastor, do I want RG3 to wear his Jesus shirt? Yes! As a Christian and a pastor, do I want to help perpetuate a false narrative of Christian persecution in America? No.  I do believe that NFL players should be allowed to wear a Jesus shirt or a Budda shirt to express their religious beliefs. As an American Baptist, we Baptists believe and have fought for religious freedom (for everyone) since the founding of this country.

On the other hand, when you sign all those contacts, paid millions of dollars, and agree to have your face on TV, you do sign away your right to do certain things. You agree that you may have to give up some privacy and personal expressions. If RG3 and others were really offended at not being able to wear a Jesus t-shirt then all they have to give up all those contracts. If the NFL wants to stay religiously neutral, then that’s their prerogative. It seems the true issue here is not American Christian persecution, but the fact that Christians must share the same public space with other religions.

At times, it will be inconvenient to be a Christian. There’s no way around it. Jesus never said it was going to be easy. To say that we are being persecuted by turning a shirt inside out cheapens the Christians who were beaten and killed for our faith. Let’s stop the narrative of false persecution and start focusing on things that really matter: sharing the Good News.