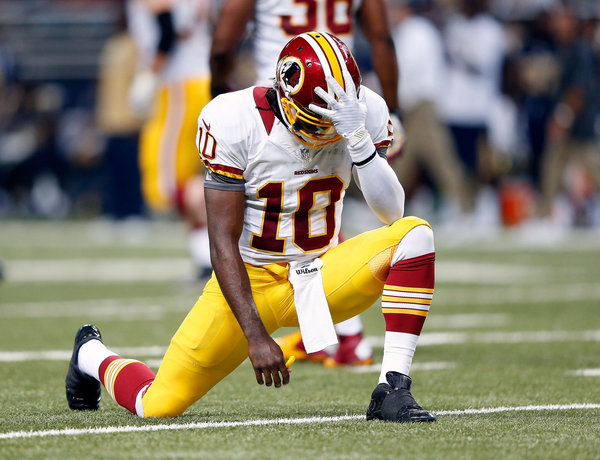 It was awful. It was embarrassing. I couldn’t watch it anymore.

My team, the Washington Redskins had started a good fight against the Seattle Seahawks on a recent Sunday night football. The Redskins came out strong and scored 14 points quickly. My team was looking like they were a sure win to continue into the NFL playoffs with strong momentum. I was hopefully that my Redskins were going to taste a Super Bowl after 20 years.

And then, a Redskins fans greatest fear came to reality.

Robert Griffin III our star rookie quarterback, who was not 100% healthy, sustained hit after hit and injury after injury. Mean while, the Seahawks put together a multi-quarter drive to put points on the score board. As it happened, RG3, became weaker and weaker. His passes were ineffective and his signature running game was just a limb jog to the sideline.

Ugh. It was like watching a train wreck slowly.

“Is anyone going to do anything about RG3!?!” I yelled at the TV.

Passes were misfired, plays were broken up, and interceptions occurred. The play-maker for the Redskins was hurt and no one seemed to do anything about it. Finally, the game was lost.

Immediately, fingers start to point as to who was responsible for RG3’s unhealthy play. It was the coach. It was RG3. It was the team doctor. The list went on. It seems that the team leadership was simply concerned about winning and not about the long term health of the quarterback

How could this happen?

A similar question is asked when churches begin to decline and die. Some see the signs. Congregational misfires, church ego injury, and a limping leadership. However, no one does anything to change course. Watching a church die is a painful process. A place of hope, resurrection, life, and compassion begins to turn inward and cannot see the warning signs.

Much like RG3 in the 2013 wildcard playoffs, dying churches do their best to stay in the game. They wrap their wounds. Keep using the same plays. And, wildly try to be a church they can no longer be. Even if a young talented leader comes in to a dying church, that leader can only be a successful as he or she is equipped to be. Many churches do not know they are dying or rather, accept that they are dying until they are injured and wounded. By then, it is so late in the game that changing course is see as hopeless.

How can churches change the direction of the game?

Call a time out. Take out the wounded and care for them. A church must heal from past wounds of loss, despair, and lament their downfall. Only then, can a church begin to imagine a new future that is bright, exciting, and hopeful. Processing the grief and loss of decline can help the wounded. Then, a church can stop looking inward and can begin to look outward by asking the question, “How is God calling us to play the field of ministry in light of our situation?”

Sometimes a new coach or leader is needed. Sometimes a player may need to be treated. However, the true issues lay with in a church’s ability to look at their reality and to make a new plan for the future.

For the Redskins it was too late. The damage was done. Now, we hope that RG3 can heal and he can bring us into a new life in the 2013-2014 season. Likewise, churches who experience death, tragedy, or decline can reverse course, but only if they can focus on healing. And, if they can focus on what God holds in store for them in the future.

Editor’s note: This blog appeared previously as an ABPnews commentary.