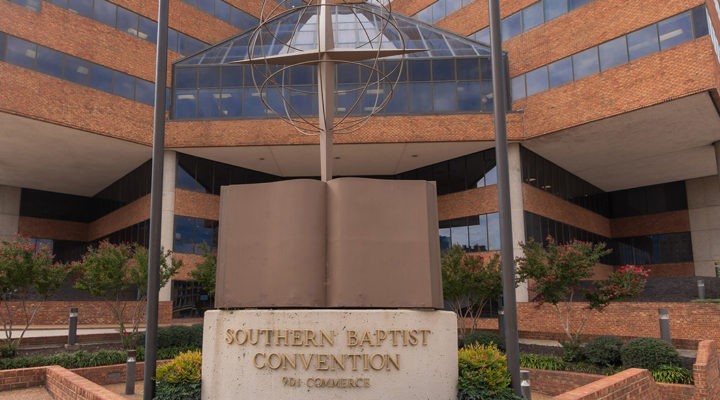 Floyd quit Oct 14 after only 28 months on the job, saying he could not abide by the recent decision to waive attorney-client privilege for a sexual abuse investigation. Subsequently, the executive vice president and the chief financial officer of the Executive Committee also resigned.

Due to an unprecedented number of trustee resignations — mainly also in protest of waiving attorney-client privilege — the size of the board now stands at 68, instead of 86. Among those 68 trustees, one-third (23) were nominated for consideration of service on the presidential search team. Rolland Slade presides as the names of the search committee are shown on the screen behind him.

Committee members then voted by ballot to choose the six members of the search team. Executive Committee Chairman Rolland Slade will serve on the team as an ex officio member until his term expires in June.

Those elected are Mollie Duddleston, Adron Robinson, David Sons, Philip Robertson, Jeremy Morton, and Mike Keahbone, who was elected to the last position in a runoff.

Duddleston serves as director of ministry operations and women’s ministry at Cross Church in Springdale, Ark., the church where Ronnie Floyd was pastor for four decades before coming to the Executive Committee role.

Robertson, senior pastor of Philadelphia Baptist Church in Pineville, La., serves on the leadership team of the Louisiana Chapter of the Conservative Baptist Network.

Morton serves as lead pastor at First Baptist Church, Woodstock, Ga.,where he followed the 33-year pastorate of Johnny Hunt, who now serves as senior vice president of the SBC North American Mission Board.

The appointment of the search team comes mere weeks after the Executive Committee’s appointment of its first Black president, Willie McLaurin, who is serving on an interim basis.

With additional reporting by David Bumgardner.