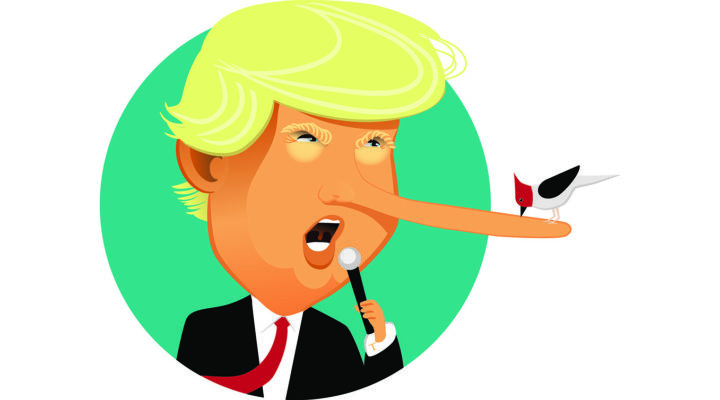 Truth Decay: Christians are supposed to tell the truth

“Run to and fro through the streets of Jerusalem, look around and take note! Search its squares and see if you can find one person who acts justly and seeks truth — so that I may pardon Jerusalem.” – Jeremiah 5:1

America’s white Christians have not distinguished themselves as seekers of truth during the crisis of the Trump years. They bear primary responsibility for electing, supporting and sustaining Donald Trump. White evangelical Christians have been his strongest base of support, but it should not be overlooked that white mainline Christians still voted for Trump in November at well over 50%.

There ought to have been many reasons why American Christians of all races should have had an immunity against finding Trump attractive or even barely acceptable as a president. I have outlined those reasons endlessly over the last five years. But one of the reasons — and the one I want to elevate here as I end this series — is Trump’s pathological, sinful and socially cancerous mendacity. John 8:44 quotes Jesus saying this to his adversaries: “You are from your father the devil, and you choose to do your father’s desires. He was a murderer from the beginning and does not stand in the truth, because there is no truth in him. When he lies, he speaks according to his own nature, for he is a liar and the father of lies.”

I am not selecting this quote to identify Donald Trump with Satan, although we could have an interesting conversation about the demonic here. I want us to hear these cadences: “He does not stand in the truth, because there is no truth in him. When he lies, he speaks according to his own nature, for he is a liar.”

He is a liar and the father of lies. Fathers spread their seed and produce offspring. You don’t have to be Satan to father lies. You just have to be a highly influential and powerful person to whom people listen. Perhaps a president with a (now banned) Twitter account with 89 million followers. You just have to be a person whose lies connect in some profound way with the need of millions of people to believe in you and in them.

“Donald Trump has been a ‘father of lies’ because he has produced an offspring of sycophant liars and metastasizing lies through the body politic.”

The tragedy of it is that white American Christians have shown no immunity to this liar and his lies. Instead, my people have been among the foremost sycophants and believers, cancer victims and super-spreaders. It must be that we had a susceptibility to this man and his lies that long preceded his emergence on the scene.

But how we have humiliated ourselves and the name of Christ during the horrors of the Trump era in America. Among the leading conspiracy theorists, QAnon people, election fraud claimers and Congressional votes for rejecting the electoral college results have been a disproportionate number of white, mainly evangelical, Christians.

My teacher Glen Stassen talked about “information integrity” as crucial for Christian ethics. I never asked him where he got this term, but a search reveals that it seems to have come out of the computer security world. Information integrity is “the dependability and trustworthiness of information. More specifically, it is the accuracy, consistency and reliability of the information content, processes and systems.”

Glen selected the term as a metaphor for the process of Christian theological and moral discernment. The basic idea is that we cannot think well in the realm of Christian ethics if we do not have information integrity. If we process our moral choices based on undependable or untrustworthy information, our bad inputs will produce bad outputs. If where we go to get our information, and the way in which we process information, lacks integrity, we will consistently get bad results.

“If where we go to get our information, and the way in which we process information, lacks integrity, we will consistently get bad results.”

If based on lies we think the U.S. presidential election was fraudulent, we might just storm the Capitol building and leave five people dead.

Instead, if we are as urgently committed to seeking truth and doing justice as the prophet Jeremiah commends in the passage above, then we must clean up our information processes, systems and content. We must improve the “dependability and trustworthiness of information.” We must not listen to inveterate liars, even if they tell us things that resonate deeply with us. We must value truth, seek truth and love truth as a core aspect of being followers of Jesus Christ who is the Truth.

One of the goals of this series has been to move truth off the backlot and onto the main stage of Christian moral reflection. Another has been to say that truth is not just a philosophical conundrum, or a theological claim, or a matter of personal character, or a matter of personal moral quandaries about when it is OK to lie, but truth is also a fundamentally significant social ethical issue — indeed, a matter of life and death deeply connected to social justice and injustice.

But all these areas do go together. I believe the truth decay of our country, in which our Christians are so deeply implicated, must be comprehensively considered:

Let us never again appoint or elect an inveterate liar to a position of responsibility anywhere within our realm of influence.

Run to and fro through the streets of our nation, look around and take note! Search its squares and see if you can find one person who acts justly and seeks truth — so that God may pardon us.