What I learned when I got lifted up on high

At “dark thirty,” too early for a vacation morning, we waited in the chilly pre-dawn air just outside our cave hotel room in Cappadocia, Turkey. Long before the sunrise, a nondescript white van eventually would come to pick us up and take us to the lift-off site.

As we traveled in silence up and down curving, one-laned rural roads, we didn’t know what to expect. We saw taillights ahead and headlights behind, indicating that we were joining or being joined by other similar vans ferrying other similarly sleepy tourists to the site outside of town where at least 100 hot-air balloons, heated and enlarged by all that warm air, with 10 passengers and one pilot each, soon would gently lift off. Earlier, in the night-time darkness, trucks pulling long, skinny trailers loaded with long, skinny baskets, soon to be attached to balloons filled with heated air, had been delivered to their appointed lift-off spots across the carefully choreographed and well-organized landscape. Eons ago, volcanic lava combined with water had pock-marked this land and its soft stone, resulting in ubiquitous phallic structures penetrating and accentuating the rolling hills and steep valleys. And now, men and boys unfolded and heated air-filled sacks, held guidelines or helped elderly tourists like me to climb aboard safely. Later, they would pour the champaign toasts and hand out the certificates, memorializing the flight.

Feeling the upward surge of the fragile but mighty craft as it lifts from terra firma is both exhilarating and exciting. Of course, the view from 700 hundred meters, against the backlight of the rising sun, is gorgeous.

Seeing other balloons floating higher and higher in the sky is impressive. Acknowledging the benefit of the lofty perspective, the view from on high, and the dangerously attractive elements of the quiet flight will cause mere mortals to kneel in awe. Fancy cameras with exotic lenses and ordinary smart phones were constantly buzzing with activity. Sit with me some time and I will show you my photos.

But today, I am reflecting on something more beautiful, if that is possible, than the perspective from on high, surrounded by the bright breaking sunrise. For now, I am remembering something far more earth-bound, as my souvenir from this Turkish Delight of a Cappadocia balloon ride. What impressed me at least as much as the predictable heavenly view was the unpredictable conclusion to which I came while enjoying that special deluxe, multi-course, and tasty Turkish breakfast, generously provided as a part of the ticket price, back “home” at our cave hotel, after the flight. 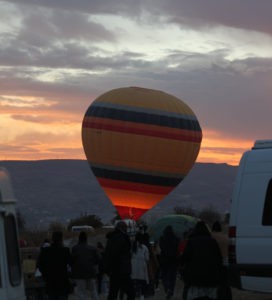 As I willfully exceeded the “feed limit,” in the same way that my aging body had defied the laws of gravity hours earlier in the day, it occurred to me that I had just been a participant in a massive undertaking, composed of many moving parts, with one, single objective.

Beyond the obvious capitalistic conclusion that this morning’s adventure offers employment for hundreds of otherwise impoverished Turkish families, with my sermon and article writer hat on, I was taken by one single and inescapable conclusion.

It came home powerfully to me that every person whom I had encountered that morning, as well as many whom I had not met, or never would, was, in those morning moments, dedicated to but one goal: he or she, young or old, experienced or novice, supporter of the Erdogan government or member of the loyal opposition — every person was working hard to achieve just one goal. And that goal was to lift me up.

Whatever role these largely anonymous characters played in the morning drama, the objective always was the same. The corporate exercise was aimed at lifting me, Janice and all more than 1,000 people higher than we had been before the flight.

Oh, what a lovely metaphor! How applicable in this day of ubiquitous, harsh and vitriolic social media comment, especially between Christians of different persuasions. Amidst all the stifling air that now pollutes our social, spiritual and moral atmosphere, how refreshing to be ensconced by hundreds of people, united in the sole purpose of lifting other human beings.

Isn’t that the goal toward which the Almighty was pointing all of us when Jesus came in the flesh and called his followers to join him?

A doorway to the sacred: Encountering God in the theater | Opinion by Stephanie Lape