What Toni Morrison taught me about my people, the Quakers

As a little Quaker girl, I read about the childhood of Lucretia Coffin Mott (Girl of Old Nantucket), who grew up to be a noted Abolitionist, and about a family of Quakers from North Carolina who journeyed with a family of freed slaves to Ohio (Tomorrow Will Be Bright). In college, I read the journal of Laura Haviland, part of the Underground Railroad in Kansas, who smuggled slaves to freedom under the floorboards of her carriage. I grew up proud of the way Quakers stood against slavery.

My education about Quakers’ participation in owning and trading slaves and their complicity in the systems of slavery was slow. And then there’s what I learned from Toni Morrison. In the novel Beloved, the central character is Sethe. The novel is richly detailed with regard to her life in slavery in Kentucky, her escape across the Ohio, her giving birth in the boat helped by a runaway indentured white girl, and her setting up a home with all her children as a free woman. Morrison makes slavery vivid. And by doing so, she also justifies Sethe’s determination (even to death) to see none of her family or herself returned to slavery.

There is an incident toward the end of the novel, after Sethe has undergone and survived a nearly fatal haunting and sickness, when her youngest daughter, Denver, is waiting for a ride to work. Her employer, the Quaker Mr. Bodwin, who was part of the Underground Railroad, is coming to get Denver in his wagon. As he pulls the horses to a stop in front of the house, Sethe’s head fills with buzzing noises, and she attacks the Quaker. Her friends and daughter pull her away from him, and they try to smooth over her actions as resulting from her illness.

But I ask: “Why did Morrison include this vignette? What does it suggest that Sethe sees that I don’t about this old Quaker man?” And this question turns out to be key for my education.

Mr. and Miss Bodwin, brother and sister, Quakers, for decades worked to abolish slavery from their home in Cincinnati. Their anti-slavery stance was based on the teaching that “human life is holy, all of it.” This work gave their lives meaning and purpose, so much so that to Edward Bodwin, life after the Civil War had lost its “spit and conviction.”

Nothing since was as stimulating as the old days of letters, petitions, meetings, debates, recruitment, quarrels, rescue and downright sedition. Yet it had worked, more or less, and when it had not, he and his sister made themselves available to circumvent obstacles.

Now he is just interested in remembering where he buried his childhood treasures. Once slavery was abolished, his meaningful work was done. He saw no further need for change. The Black community has formed this judgment of the Bodwins: they are “the white brother and sister who gave Stamp Paid, Ella and John clothes, goods and gear for runaways because they hated slavery worse than they hated slaves.” Is this a fair judgment?

Morrison embeds signs that racism infects these anti-slavery activists. Nearly a decade after emancipation, when 18-year-old Denver goes to ask the Bodwins for work, she knocks on the front door. The Black maid tells her that the first thing she has to learn is which door to knock on, namely, the back door. On her way out the back door, Denver sees a figurine of a kneeling Black man, head back, mouth wide open to hold any number of small objects or even jelly. Painted across the pedestal he knelt on were the words “At Yo Service.”

“The Bodwins, for all their Abolitionist fervor, are also continuing the subordination of the Black race to the white.”

The artifact makes the point that the Bodwins, for all their Abolitionist fervor, are also continuing the subordination of the Black race to the white. True, they have risked their lives, reputations and fortunes to rescue Black people from enslavement, but they do not welcome them into equality. They expect them to kneel and swallow whatever white folks choose to put into their mouths.

When her son Halle buys Baby Suggs’s freedom, she is delivered to the Bodwins’ house in Cincinnati, where she follows “a path to the back of the house.” They offer her their country homestead (“two rooms upstairs, two down”) to live in, and she anticipates working for money to pay rent to them. She welcomes the idea of owning her own beating heart, and then she finds that they have something else in mind. She can live there “in return for laundry, some seamstress work, a little canning and so on (oh, shoes, too).” What looks like kindness or perhaps even generosity serves to keep Baby Suggs in a way indebted or even enslaved. Baby Suggs is “sorry to see the money go.” With it goes her independence from white folks.

After emancipation, the lives of Black folk were barely free. They have to “wait out back of Phelps store … till every white in Ohio was served before the keeper turned to the cluster of Negro faces looking through a hole in his back door.” Denver learns to read from Lady Jones: “Lady Jones did what whitepeople thought unnecessary if not illegal: crowded her little parlor with the colored children who had time for and interest in book learning.”  Those who had risked everything to free people from slavery did little to nothing to free them from illiteracy, poverty and dependency. Later, when Denver works for the Bodwins at the age of 18, Miss Bodwin teaches her “stuff” and “says I might go to Oberlin. She’s experimenting on me,” she tells Paul D. But this sounds more like a hobby or game for the elderly white woman than evidence of a commitment to equality and to Denver’s well-being. Denver still has to come in by the back door.

Morrison visits the consciousness of Stamp Paid, the ex-slave who ferried escaping slaves across the Ohio, to describe the situation a decade after the Civil War.

Eighteen seventy-four and whitefolks were still on the loose. Whole towns wiped clean of Negroes; eighty-seven lynchings in one year alone in Kentucky; four colored schools burned to the ground; grown men whipped like children; children whipped like adults; black women raped by the crew; property taken, necks broken. He smelled skin, skin and hot blood. The skin was one thing, but human blood cooked in a lynch fire was a whole other thing. The stench stank. … But none of that had worn out his marrow. None of that. It was the ribbon. Tying his flatbed up on the bank of the Licking River, securing it the best he could, he caught sight of something red on its bottom. Reaching for it, he thought it was a cardinal feather stuck to his boat. He tugged and what came loose in his hand was a red ribbon knotted around a curl of wet woolly hair, clinging still to its bit of scalp. He untied the ribbon and put it in his pocket, dropped the curl in the weeds. On the way home, he stopped, short of breath and dizzy. He waited until the spell passed before continuing on his way. A moment later, his breath left him again. This time he sat down by a fence. Rested, he got to his feet, but before he took a step he turned to look back down the road he was traveling and said, to its frozen mud and the river beyond, “What are these people? You tell me, Jesus. What are they?”

This passage ought to take all our breaths away. Morrison brings the statistics of history and the general descriptions of cruelty and focuses them all on a red ribbon tied around a curl still attached to a bit of scalp. We cannot escape the horror.

“When will we face the truth and repent?”

The weight of slavery may have lifted but the far, far heavier weight of racism remains. Morrison, again through the thoughtful Stamp Paid, describes the deep destructiveness of racism for both Black and white people. For Black people, “In addition to having to use their heads to get ahead, they had the weight of the whole race sitting there. You needed two heads for that. Whitepeople believed that whatever the manners, under every dark skin was a jungle. Swift unnavigable waters, swinging screaming baboons, sleeping snakes, red gums ready for their sweet white blood.” For white people, this “wasn’t the jungle blacks brought with them … It was the jungle whitefolks planted in them. And it grew. It spread. In, through and after life, it spread, until it invaded the whites who had made it. Touched them every one. Changed and altered them. Made them bloody, silly, worse than even they wanted to be, so scared were they of the jungle they had made. The screaming baboon lived under their own white skin; the red gums were their own.”

What are these people (my people), indeed? Where are the Abolitionists of racism? Where are the prophets of equality? Where are those who believe that all human life is holy? Edward Bodwin misses the spit and conviction of his Underground Railroad days, but now, surrounded by inequality, fear and misery, he thinks only of where his childhood treasures are buried. He is still racist.

So when Sethe sees him in his wagon come to collect her daughter to take her to work, wearing a wide-brimmed hat that hides his face and holding a whip in his hand, he conflates with all the other white racists she has known, and she tries to kill him with an ice pick. 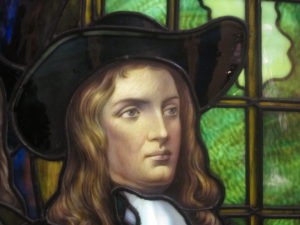 Frederick Lamb’s painting of William Penn at the Brooklyn Museum.

Morrison’s Beloved educated me to review my own Quaker and white history, and I came to see how for 150 years Quakers participated in slavery and systems of racism. I read George Fox’s “Letter to the Governor of Barbados” and noticed how he promised not to interfere with slaves. I realized that the bill of sale John Woolman refused to write was for a Quaker slave owner. I found that William Penn held slaves. I saw how Philadelphia Yearly Meeting “managed” information for decades in order to prevent abolitionist minutes from monthly meetings from reaching the yearly meeting floor. Morrison opened my eyes to the rot, the stench, in my own heritage. Small wonder that there are so few Black American Quakers.

When will we face the truth and repent? While we hated the sin of slavery, we did not love the slaves and their free children as equal human beings. Let us each carry in our spiritual pockets a red ribbon like the one that haunts Stamp Paid so that we know how cruel and evil people just like us can be.