i
Ordination photo at Saddleback Church posted to the church's Facebook page.

i
Ordination photo at Saddleback Church posted to the church's Facebook page.

The largest church affiliated with the Southern Baptist Convention ordained three women as ministers May 6, sending shock waves through the male-centric leadership of the nation’s largest non-Catholic denomination.

Saddleback Church, founded by Pastor Rick Warren and his wife, Kay, in 1980, announced on Facebook that on May 6 it had ordained three women as ministers in a “historic night.”

On Mother’s Day, which fell three days after Saddleback’s ordination, the Sunday morning online message was given by Kay Warren. Although she is not among the newly ordained, her delivery of the Sunday morning message in worship was sure to further alarm the strictest of male leadership advocates within the SBC, who insist women should not preach sermons to men. The three women ordained May 6 are Liz Puffer, Cynthia Petty and Katie Edwards — all long-tenured staff members within the vast network of the church’s 15 United States campuses and four international campuses. The church counts more than 24,000 members and lists 18 “campus pastors,” all of whom are male.

Because of the massive size of the church spread out over so many locations, no complete staff directory is published online. Petty’s LinkedIn profile lists her as children’s minister at Saddleback, where she has served since 1999. Puffer describes herself as a “minister” at Saddleback Church in both her LinkedIn and Twitter profiles. Her Facebook profile describes her as a pastor for pastoral care at the church. Edwards serves as student ministries pastor at Saddleback’s Lake Forest campus, where she has worked for 24 years.

Saddleback not only is the largest church in the SBC but one of its leaders in evangelism. The church’s emphasis on evangelism and church growth have been studied and duplicated worldwide. Warren was one of the early advocates for what came to be known as “seeker-friendly church,” meaning a church experience intended specifically to welcome unchurched people and bring them to faith in Jesus Christ. He wrote about this in a best-selling book, The Purpose Driven Church.

A hot issue in the SBC

As the SBC has faced year after year of declining membership — along with every other Christian denomination in America — its leadership has become increasingly dogmatic about certain doctrinal issues, including opposition to women as pastors. This issue was one of the driving factors behind the schism that began in the SBC in 1979 and ultimately led to the creation of two splinter groups, the Alliance of Baptists and the Cooperative Baptist Fellowship.

This also caused international headlines earlier this year when popular Bible teacher Beth Moore announced she was leaving the SBC and apologized for not speaking out earlier about the limits placed on women as leaders within SBC churches. In a question-and-answer section on the SBC’s website, the matter of women serving as pastors is addressed. The site says: “The convention recognizes the biblical language concerning the office of pastor” and points to a section of the Baptist Faith and Message doctrinal statement. That citation reads: “While both men and women are gifted for service in the church, the office of pastor is limited to men as qualified by Scripture.”

The SBC’s official explanation adds: “The passages that assign the office of pastor to men do not negate the essential equality of men and women before God, but rather focus on the assignment of roles.” This is in keeping with a theological view known as complementarianism, which teaches that women and men have equal worth before God but must adhere to different roles assigned to them by God in creation.

Complementarians lean heavily on one verse of Scripture, 1 Timothy 2:12, to make their case.

In 1984, as fundamentalists were consolidating control of the SBC, messengers to the SBC annual meeting adopted a highly controversial resolution on ordination and the role of women in ministry. That resolution said the Apostle Paul, in writing 1 Timothy, “excludes women from pastoral leadership to preserve a submission God requires because the man was first in creation and the woman was first in the Edenic fall.”

Therefore, the resolution stated, “we encourage the service of women in all aspects of church life and work other than pastoral functions and leadership roles entailing ordination.”

“We encourage the service of women in all aspects of church life and work other than pastoral functions and leadership roles entailing ordination.”

In recent years, the SBC has expelled churches from membership when they go against the denomination’s stated positions on key issues, such as LGBTQ inclusion. While local Baptist associations have removed churches for ordaining women, the SBC has not.

The Saddleback news, however, could push that issue to the forefront, as some SBC pastors immediately took to social media over Mother’s Day weekend to call for Saddleback’s expulsion.

Other denominational leaders stopped short of calling for expulsion but made their displeasure clear. Al Mohler, president of Southern Baptist Theological Seminary in Louisville, Ky., and candidate for SBC president this summer, posted on Twitter a comment from John Broadus, one of the seminary’s slave-holding founders, about why women should not be allowed to “speak in mixed public assemblies.”

Jason Allen, president of Midwestern Baptist Theological Seminary in Kansas City, Mo., tweeted that Saddleback’s action is “a disappointing departure from the clear teaching of Scripture, the BF&M, & long-held SBC consensus & practice.” He said the teachings of 1 Timothy 3 and Titus 1 “list qualifications, not suggestions. Let’s hold fast to Scripture.”

Adam Greenway, president of Southwestern Baptist Theological Seminary in Fort Worth, Texas — Rick Warren’s alma mater — tweeted a quote from seminary founder B.H. Carroll: “The custom in some congregations of having a woman as pastor is in flat contradiction to this apostolic teaching and is open rebellion against Christ our King, and high treason against His sovereignty … Under no circumstances conceivable is it justifiable.”

Mike Stone, a Georgia pastor and also a candidate for the SBC presidency representing the most conservative side of the conservative denomination, tweeted one sentence: “No woman can be the ‘husband of one wife,’ under any interpretation of that phrase.” That is a reference to 1 Timothy 3:2, where the Apostle Paul writes that an “overseer” is to be “the husband of one wife.”

Others welcomed the news of Saddleback’s ordinations while some pointed out that all three women who were ordained had labored as ministers for decades before being recognized as such. 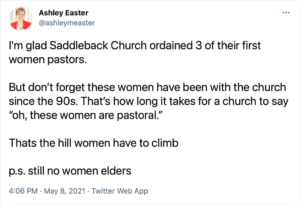 Ashley Easter, an author and advocate for women’s service in the church, tweeted her gratitude for Saddleback’s action, then added: “But don’t forget these women have been with the church since the ’90s. That’s how long it takes for a church to say, ‘Oh, these women are pastoral.’ That’s the hill women have to climb.”

Other than the social media post announcing the ordination and showing photos from the service, Saddleback issued no public statement on the matter, and no video of the ordination service was made available online.

This fits the long-time pattern of Warren and the church, with a routine focus on outward mission and not internal church workings or denominational concerns. While Warren has been supportive of the SBC, he has refrained from nearly all political or denominational issues. After Rick Warren graduated from Southwestern Seminary, he and Kay arrived in California in 1979 with a vision for starting a church for people who weren’t interested in church. He famously went door to door, asking people three questions that opened conversations about faith and the church.

Pragmatism has been a hallmark of Saddleback’s growth from the beginning. While espousing highly orthodox evangelical theology, Warren often has been an outlier on non-essentials, such as worship format, music styles and ministry approaches.

Beginning with a small Bible study in their home, the Warrens quickly grew Saddleback after a public launch on Easter Sunday 1980, when 205 showed up. Most of those in attendance never had been churchgoers before.

More than 200,000 church leaders have been trained in Saddleback’s purpose-driven philosophy, and Warren’s 1995 book sold more than 1 million copies and has since been reissued in an updated edition.

In a world of celebrity pastor scandals, the Warrens have stayed out of the news and have remained deeply involved in the day-to-day leadership of the multi-campus church.

How the decision was made

At this point, little is known about how Saddleback made the decision to ordain women, as the church has made no public explanation. The only public insight appeared in an interview posted on Live Good, the website for a company that sells organic products. There, Cynthia Petty explained how she came to be among this historic group of female ministers ordained at Saddleback. Petty said of Warren’s phone call: “He affirmed my leadership and my calling to ministry, and it was a conversation I will not forget.”

Asked about her own sense of calling, Petty said: “I love my ministry to children and students, and I have never doubted God’s calling on my life to do ministry at Saddleback. That calling and leading by God in my life has always sustained me, even in the most difficult of ministry days. Becoming a pastor was never something I pursued. I had always been involved in churches where women could lead, under the authority of a male pastor.  So, this change in philosophy for ‘women in ministry’ was revolutionary. I was honored and felt extremely humbled. And the thing I believe meant the most to me was how this would be groundbreaking for all the younger women ministers on staff who really did have the desire or dream to be a pastor one day.”