Reflections on The Rise and Fall of Mars Hill

When I was in college in the mid-2000s, I devoured books by pastors and writers who were labeled “Emergent.” Coming out of my Southern Baptist upbringing, I was drawn to expressions of Christianity that seemed to engage culture not as an enemy, but as an opportunity for greater contextualization of the gospel.

It seemed that much of the kinetic energy behind this Emergent movement was coming out of the Pacific Northwest. Donald Miller, who lived in Portland, Ore., wrote his book Blue Like Jazz. I was so captured by his frank and honest reflections on faith that I jumped at the opportunity after my freshman year of college to do an internship in Portland with a fledgling ministry organization.

My internship was to work with a ministry to the unhoused based out of a small church start. We worshiped in a movie theater, and we hosted nightly events where we washed the feet of and provided free haircuts for the unhoused on the streets of Portland. Our small congregation was part of a quasi-denominational body of churches called the Acts 29 Network, a group of theologically Reformed church planters.

As part of the internship, the other intern and I were given a book to read written by one of the main leaders of the Acts 29 Network. The book was The Radical Reformission by Mark Driscoll. In it, Driscoll lays out his personal sense of mission and calling for churches to be places of deep doctrinal truth and also edgy experiences of cultural engagement.

“I was discerning a call to ministry at the time, and Driscoll’s concrete certainty was appealing at a time in my life when I felt out at sea riding the waves of doubt and confusion.”

I was discerning a call to ministry at the time, and Driscoll’s concrete certainty was appealing at a time in my life when I felt out at sea riding the waves of doubt and confusion.

For the next couple of years, I followed Driscoll’s ministry as it began to explode on YouTube. Friends would send me clips of his sermons, and we would gawk at his audacity to scream at his congregation and curse while preaching. However, his fervency always seemed to arise out of a passionate adherence to the gospel and, therefore, we felt his outbursts and vitriolic language were simply expressions of his fervency for truth and righteousness. In other words: The ends justified the means.

As my theological horizons began to expand, I started to see Driscoll’s sermons in a new light. I could no longer square away his “prize-fighter” version of Jesus with the Lamb of God. I heard too many stories of women who were turned away from the gospel because of Driscoll’s rants about “Femi-Nazis.” Eventually, by the grace of God, I found other voices that led me deeper into the way of Jesus. Which is why I have listened with heightened interest to the recent podcast from Christianity Today called The Rise and Fall of Mars Hill. For those who may not be aware, The Rise and Fall of Mars Hill catalogues the story of Driscoll, the church he founded in Seattle (Mars Hill), its rapid growth and its even more rapid closing after Driscoll was found to have fostered an abusive and noxious leadership environment.

The final episode recently posted caused me to reflect on the experience of listening to this story of a church’s rapid growth and sudden crumbling.

The podcast has not been without controversy, and I think some of the criticism has been unfair. Some people have taken umbrage at the fact that the podcast highlights some of the positive experiences many had at Mars Hill. One episode features a beautiful story of a father baptizing his daughter. Twitter exploded with indignation that the podcast was somehow giving credence to Driscoll’s toxic theology. But I think those criticisms show an ignorance of the cultural contexts that give rise to leaders like Driscoll.

We need to hear those stories of genuine ministry because they serve as a warning to those who are currently embedded in church settings. None of us are immune from being blinded by the good things happening around us to the point where we shrug off possibly toxic behavior from our leaders or ourselves. 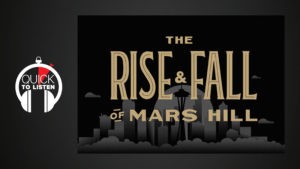 Because if the only lesson I take away from The Rise and Fall of Mars Hill is, “Woo. Thank God I’m nothing like Mark Driscoll,” then I am no better than the Pharisee standing in the Temple with gratitude that I am not like that tax collector (Luke 18:9-14).

Instead, we all must wrestle with what we carry within ourselves and be willing to examine (deconstruct) our own theologies and perspectives on leadership. None of us are immune from falling into the trap of becoming a toxic leader or participating in the toxic culture of a church or hitching our wagon to toxic theology because we have somehow convinced ourselves that the ends justify the means.

In their book A Church Called Tov, father and daughter Scot McKnight and Laura Barringer write about how churches become places of goodness (the Hebrew word for “good” is tov) instead of harm. They draw from high-profile examples of toxic leadership such as Bill Hybels or James MacDonald, but throughout the book they warn that the symptoms that led to these downfalls are pitfalls for all of us. They write: “When leaders acquire power, power itself becomes an agent that may reduce the leader’s capacity for empathy and compassion, especially toward those who are powerless (like women, in many churches). Such a self-centered hubris may cause the personal character of the power-shaped pastor to lose contact with the very essence of Christianity.”

It’s not that the podcast has been without faults. I wish The Rise and Fall of Mars Hill had gone much further in deconstructing the ways Mark Driscoll’s theology arose out of a patriarchal form of Calvinism that leads many down a path of theological arrogance that is often disguised as “biblical Christianity.”

“Mark Driscoll’s theology arose out of a patriarchal form of Calvinism that leads many down a path of theological arrogance that is often disguised as ‘biblical Christianity.’”

I wish the podcast had done more to talk about how Driscoll’s constant mocking of anything outside traditional gender roles came from a place of deep and sinful homophobia and transphobia.

I wish the podcast had done more to examine the ways Driscoll constantly preached the myth of redemptive violence and used war imagery in harmful and unwise ways. I wish all of those things and more.

Yet, I am grateful for The Rise and Fall of Mars Hill because it has reminded me of the utter necessity of cyclically deconstructing my own theology and my own sense of calling.

May I never be caught in the traps of power and fame.

May I never be the source of my neighbor’s spiritual trauma.

And may I never stop pursuing the grace of the mystery of God at work in broken places, at work in me.

Tyler Tankersley serves as senior pastor of Ardmore Baptist Church in Winston-Salem, N.C. He is a graduate of Central Baptist Theological Seminary.