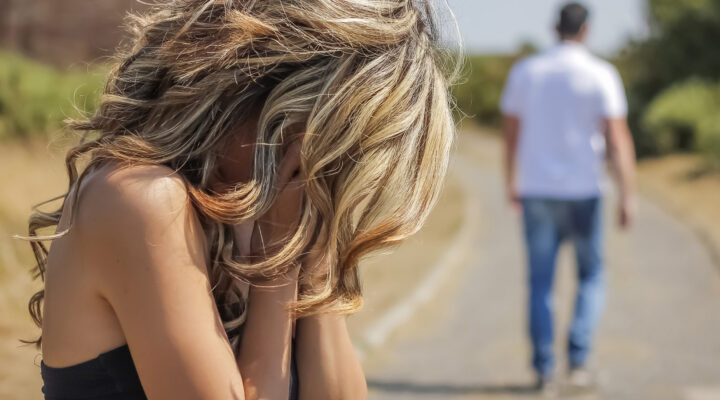 Wife of vocal SBC pastor claims suffering emotional and verbal abuse was not grounds for divorce, but for ‘greater hope’ in God

Jennifer Buck, wife of outspoken Texas Southern Baptist pastor Tom Buck, has published her story of being mistreated and misunderstood — perhaps even abused — early in her marriage to communicate to other couples “God’s ability to bring about repentance, restoration and reconciliation.”

In an article published by the conservative, Calvinistic network known as G3 Ministries, she tells of being slapped on the wrist and enduring her husband’s “bitterness, anger and shouting” in the difficult first five years of marriage. The article was shared by Buck in an April 7 tweet. It garnered nearly 600 likes and 120 retweets. Current SBC presidential candidates Bart Barber and Tom Ascol called the article “courageous” and “a wonderful story of God’s powerful grace,” respectively.

In the article, Buck relays the story of suffering a miscarriage amid the difficult early years of marriage. “This led to despair as I wondered if I would survive emotionally or if our marriage could remain intact,” Buck wrote. “I had convinced myself that I was the issue in our marriage. If I could just respond right, I believed he wouldn’t get so angry.”

Later, Buck found a confidant in an older woman named Dottie, whom Buck claims began to disciple her and help her navigate issues in her marriage. Earlier in the article, Buck claimed her husband’s conduct was “certainly abusive.” However, Buck claims that Dottie “never suggested divorce as an option,” although she clarified that Dottie made sure she was not being physically harmed.

Buck claims that, eventually “things finally came to a head” when her husband slapped her on the wrist “in a quick flash of anger” after she playfully placed a cold Coke can on his neck. “This scared me,” Buck wrote. “I knew if something was not done, this had the potential for further escalation, and I would not be able to stay. I learned later that it had scared him, too.”

The article concludes with Buck sharing that her husband eventually found a mentor who helped him “repent of his anger.” While “restoration did not happen overnight,” Buck claims that “none of those ugly days have been repeated” since their reconciliation. Citing Romans 8:28, Buck declares that the abuse and subsequent reconciliation “testify” of God’s working of all things together for good.

Buck’s article was published by G3 Ministries 11 days after an anonymous source close to the Bucks contacted Baptist News Global and other media outlets with an earlier draft of Buck’s article that was slated to be published pseudonymously in 2018 in the wake of Paige Patterson’s firing from Southwestern Baptist Theological Seminary for mishandling abuse cases. BNG was able to confirm that the draft was authentic and written by Jennifer Buck in 2018.

That earlier draft reportedly was shown to only a few people, one of whom apparently leaked it to media in an attempt to discredit Tom Buck, pastor of First Baptist Church of Lindale, Texas, and a supporter of Ascol in the upcoming SBC presidential election. About the same time, an unnamed “pastor from another state” launched a chain of events that caused Florida pastor Willy Rice to drop out of the presidential race because his congregation some years ago ordained as a deacon a man who had a past history of abuse. The accounts in the 2018 draft and the article published by G3 differ vastly in content, detail, scope and length.

The source who contacted BNG via an untraceable email appears also to have created an anonymous Twitter account on Thursday, March 31. In a reply to Tom Buck, the source tweeted the following: “Did your wife fear she was ‘not going to survive’ because of your abuse? Shouldn’t you be disqualified from ministry?”

The source may have been alluding to the 2021 resolution adopted by messengers to the SBC annual meeting titled “On Abuse and Pastoral Qualifications.” The resolution reads, in part, “RESOLVED, That the messengers to the Southern Baptist Convention, meeting in Nashville, Tennessee, June 15-16, 2021, believe that any person who has committed sexual abuse is permanently disqualified from holding the office of pastor.” Other forms of abuse, such as physical or emotional abuse, are not mentioned in the resolution.

Neither the original version nor the published version of Jennifer Buck’s article mentions sexual abuse. Her stories center on emotional and verbal abuse. 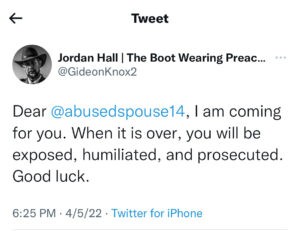 Five days after the anonymous tweet, controversial right-wing blogger Jordan Hall tagged the source, whose username was @abusedspouse14, and issued the following threat in a tweet: “Dear @abusedspouse14, I am coming for you. When it is over, you will be exposed, humiliated, and prosecuted. Good luck.”

The threat seemed to deter the source from attacking Tom Buck further, as both the source’s Twitter account and email address used to contact BNG have been deactivated.

For his part, Tom Buck has been outspoken about the issue of abuse in the SBC. He has asserted that “soft effeminate men” are at the “heart” of the abuse of women and children in churches.

“Real men don’t stand by silent as women or children are abused and wait until it becomes politically expedient to do something about it,” he has tweeted. “I’ve spoken out and fought against abuse for 25 years as a pastor.”

Buck also has claimed that “effeminate men” are the “biggest problem right now in the SBC.”

Last month, Buck said he wondered “if Grant Gaines has any regrets of opening Pandora’s Box upon the SBC.” Grant Gaines made the motion for an independent investigation of the SBC Executive Committee’s alleged mishandling of abuse at last year’s annual meeting in Nashville.

Buck also provided a statement to BNG last month when a private conversation between an abuse survivor, an Executive Committee member and SBC President Ed Litton’s assistant pastor was leaked in an attempt to corroborate claims that the survivor had been mistreated.

Buck provided the following statement to BNG when asked for comment on that story: “When Mike Stone was accused of mistreating a survivor at the SBC 2021 annual meeting, these men and their friends either joined the attacks on Stone or remained silent. Now that they are being accused of mistreating a survivor, they want to be extended grace and consideration that they were unwilling to give to Mike Stone. I wonder if they are now sympathetic for what happened to Mike Stone.”

Stone was last year’s candidate for SBC president backed by Tom Buck and other SBC Calvinists and far-right pastors.

One thing that remains unclear is what exactly the majority of churches and messengers in the SBC believe about pastoral qualifications, divorce and their relationship to physical and emotional forms of abuse — beyond sexual abuse.

According to the National Coalition Against Domestic Violence, one in three women and one in four men have experienced some form of physical violence by an intimate partner. The NCADV also reports that victims often choose not to leave their abusive partners because of “fear that the abuser’s actions will become more violent and may become lethal if the victim attempts to leave, unsupportive friends and family… (and) religious or cultural beliefs and practices may not support divorce or may dictate outdated gender roles and keep the victim trapped in the relationship.”

Contrary to the advice Jennifer Buck received from her mentor, Dottie, an SBC professor recently wrote that physical abuse is, in fact, grounds for divorce. Jared C. Wilson, assistant professor of pastoral ministry at Midwestern Baptist Theological Seminary’s Spurgeon College, recently argued: “It is reasonable to assume that the Bible allows divorce only on the grounds of ‘sexual immorality’ or abandonment and that, by implication, there is a limited range of activity, including abuse and pornography use, that may qualify as either or both of the above. In short, sexual or other physical abuse of one’s spouse is sexual immorality, and thus is biblically permissible grounds for divorce.”

Listening and learning from the SBC: Does the buck stop here? | Opinion by Earl Chappell