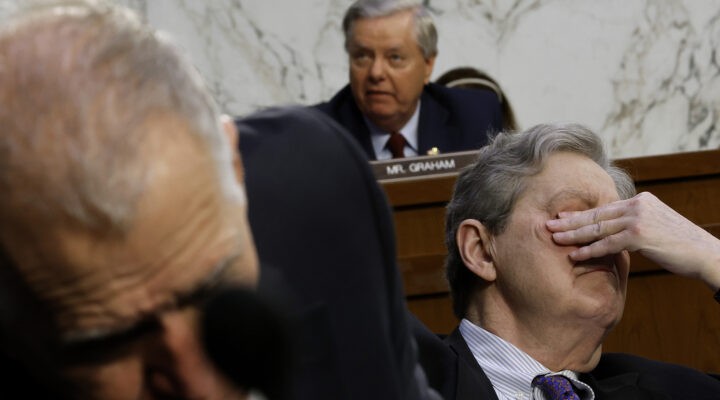 Once again, a United States senator asked a nominee for public office a question about personal religious practice, despite the clear prohibition of Article VI of the U.S. Constitution.

Ironically, while pressing Jackson about her faith and her church attendance, the conservative evangelical senator admitted that he attends his own Southern Baptist church only about three times a year.

Graham began his questioning with this: “What faith are you, by the way?”

Then he asked: “Do you attend church regularly?” Still not through with the religion theme, he continued: “Could you fairly judge a Catholic?”

Graham is not himself a Catholic; he’s reported to be a member of Corinth Baptist Church, in Seneca, S.C. The senator is a reliable and top-rated ally of the religious right.

Commentators from various political perspectives have drawn a direct line between Graham’s questioning of Jackson and his displeasure over how Senate Democrats scrutinized Justice Amy Coney Barrett, a conversative Catholic, during her confirmation hearings. Although at Barrett’s Supreme Court hearings, she was not questioned in this same direct way.

In a 2017 hearing for her confirmation as a federal appeals court judge, Barrett had been asked by Sen. Dianne Feinstein, D.-Calif., whether her religious views might influence her ability to be an impartial judge. “The dogma lives loudly in you,” Feinstein said, drawing a harsh rebuke from both sides of the aisle and from church-state separationists in particular.

In the Jackson hearings, Graham’s questions “were purely theatrical,” the Freedom from Religion Foundation reported. “Graham had an ax to grind and was exploiting the hearing to claim that Amy Coney Barrett was ‘treated very, very poorly’ during her confirmation hearings.”

The Freedom from Religion Foundation called Graham’s performance a “bizarre and phony line of questioning.”

Amanda Tyler, executive director of Baptist Joint Committee for Religious Liberty, tweeted a reminder to Graham that the Constitution states: “No religious test shall ever be required as a qualification to any office or public trust under the United States.”

When asked by Graham to rate her faithfulness on a scale of 1 to 10, Jackson replied: “I am reluctant to talk about my faith in this way. … I want to be mindful of the need for the public to have confidence in my ability to separate out my personal views.”

The next day, Sen. John Kennedy, R.-La., also walked the line on questioning religious belief and practice while addressing the issue of abortion. Kennedy, also a darling of the religious right, asked Jackson when life begins. The nominee said she didn’t know, to which Kennedy replied: “Do you have a belief?”

Religious conservatives most often explain their anti-abortion stance in theological terms that have political implications.

“I have personal religious beliefs that have nothing to do with the law.”

Jackson didn’t take the bait, replying: “I have personal religious beliefs that have nothing to do with the law.” And when pressed again: “I have a religious belief that I set aside when I’m ruling on cases.”

Jackson has been notoriously circumspect about her religious affiliation, describing herself only as a “nondenominational Protestant.” She previously served on the board of a private school affiliated with a Southern Baptist church in Maryland, but there is no indication of that congregation being her church home.

Jackson has spoken often, but typically in vague terms, about the role of faith in her life, such as this line from her opening statement to the Senate committee: “I must also pause to reaffirm my thanks to God, for it is faith that sustains me at this moment.” Earlier, when introduced by President Joe Biden as his nominee, she remarked: “Even prior to today, I can honestly say that my life had been blessed beyond measure.”

During last week’s confirmation hearings, Jackson also was asked legal and contextual questions that touch on religion and the law. For example, Sen. John Cornyn, R-Texas, asked whether she agrees that “it’s important to accommodate the sincerely held religious beliefs of all Americans when it comes to legislation that the Congress may pass.” Jackson spoke of the role of religious freedom in the founding of America’s democracy, calling it “a core, foundational, constitutional right.”