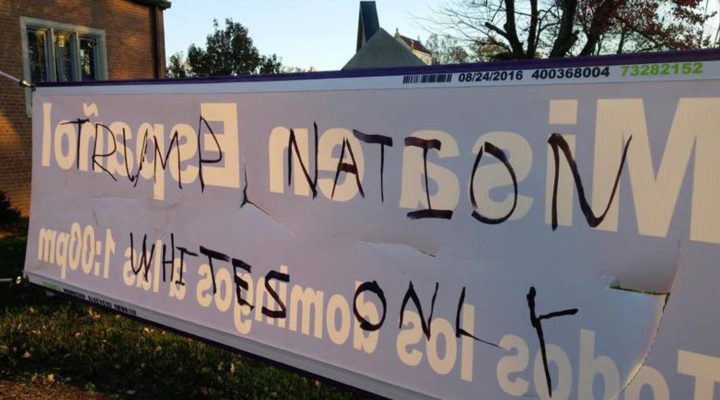 i
Someone spray painted “Trump nation whites only” in black letters on a brick wall around the memorial garden at Church of Our Saviour in Hillandale, Md., in 2016.

i
Someone spray painted “Trump nation whites only” in black letters on a brick wall around the memorial garden at Church of Our Saviour in Hillandale, Md., in 2016.

How do you measure racism?

In the contemporary American battleground of politics, culture and religion, people often call out others for being racist, and those accused often reply, “I’m not a racist.” Still others proudly wear the label “racist” as a way of confessing their past sins.

But just how much “racist” does one have to be in order to be rightly labeled “racist”? The folks at Public Religion Research Institute think about this question a lot, because a huge part of their polling work focuses on race. Their founder, Robert P. Jones, has written two bestselling books about race, culture and religion.

One way they’ve devised to measure racism is the Structural Racism Index, first created for Jones’ book White Too Long. His original 15-question index now has been reduced to a composite of answers to 11 questions on a range of topics, from attitudes about white supremacy and racial inequality, to the impact of discrimination on African American economic mobility, to the treatment of African Americans in the criminal justice system, to general perceptions of race and whether racism is still a significant problem today.

By combining answers to these questions, PRRI discerns scores on a scale from 0 (low) to 1 (high). Therefore, most scores are expressed in a fraction because only a pure racist would score a perfect whole number one, and only a completely nonracist person would score a blameless zero.

How racist are we?

Among all Americans, the median value on the structural racism index is 0.45, near the center of the scale, in the latest 2022 polling.

Of course, there are variations all along that scale that correlate with a respondent’s race, age, location, education, political party and religious beliefs.

“The data confirm the truth that everyone’s a little bit racist — but some are a whole lot more racist.”

The data confirm the truth that everyone’s a little bit racist — but some are a whole lot more racist.

The median score for Republicans is 0.67, compared with 0.45 for independents and 0.27 for Democrats. Political affiliation is a stronger indicator than a person’s race. White Republicans score 0.67 and Republicans of other races score 0.58. Scores among white independents (0.48) and white Democrats (0.24) are much lower.

Is this a fair scale?

Some might question whether the index was designed to make Democrats look better than Republicans and the non-religious look better than the religious. The answer lies in coming up with a shared definition of racism.

And that is the heart of the problem. Many of those who score high on PRRI’s racism index genuinely believe they are not racists — at all. The very questions PRRI uses to score racist attitudes speak of actions and attitudes they don’t perceive to be racist.

The 11 statements respondents are asked to agree or disagree with are these:

Many of these statements represent documented and historical facts, such as the economic advantage white people have over Black people or the greater likelihood of a Black person getting the death penalty than a white person. To deny these realities is to deny reams of validated research.

The importance of personal experience

But some of these statements represent softer ideas that are, in fact, matters of perspective. For example, “Racial minorities use racism as an excuse more than they should.” This statement is a common talking point among white conservatives, who often believe minorities overstate their case.

But that is a perspective based on one’s own life experience. One person’s whining is another person’s desperate cry for help.

“One person’s whining is another person’s desperate cry for help.”

Another part of PRRI’s research illustrates how one’s own life experiences may influence their understanding of racism.

One of the narratives popular among white evangelicals is that they experience persecution for their religious beliefs. In an increasingly secular culture, they contend, their more exclusivist views on morality, in particular, make them the objects of scorn.

Latter-day Saints (43%) and Jews (33%) are far more likely than white evangelicals to report they have experienced religious discrimination.

PRRI’s latest data on the Structural Racism Index differs from the original 2018 survey because the number of questions in the mix has been reduced. Therefore, the year-to-year trends are not directly comparable.

However, the general trends are the same, and there remains a huge chasm between white Americans — particularly white evangelicals — and everyone else In a 2020 column for NBC News, Jones explained what he sees behind the numbers: “A close read of history reveals that we white Christians have not just been complacent or complicit; rather, as the nation’s dominant cultural power, we have constructed and sustained a project of perpetuating white supremacy that has framed the entire American story. The legacy of this unholy union still lives in the DNA of white Christianity today — and not just among white evangelical Protestants in the South, but also among white mainline Protestants in the Midwest and white Catholics in the Northeast.”

Year after year, he wrote, “a clear pattern has emerged: White Christians are consistently more likely than whites who are religiously unaffiliated to deny the existence of structural racism.”

And one of the greatest barriers to talking about this is a difference in perceptions about what is racist.

“The results point to a stark conclusion: While most white Christians think of themselves as people who hold warm feelings toward African Americans, holding racist views is nonetheless positively and independently associated with white Christian identity,” Jones wrote in 2020. “Again, this troubling relationship holds not just for white evangelical Protestants, but also for white mainline Protestants and white Catholics.”

A possible cure for racism?

Jones projected a cure for the sin of racism, however: Telling the truth about America’s racial history and its long-lasting legacy.

“When we allow ourselves to cast our gaze beyond the rosy stories we tell about ourselves as champions and representatives of all that is good in America, a terrifyingly troubled alternative history emerges,” he wrote. “While it may seem obvious to mainstream white Christians today that slavery, segregation and overt declarations of white supremacy are antithetical to the teachings of Jesus, such a conviction is, in fact, a recent development for most white American Christians and churches, both Protestant and Catholic.

“The unsettling truth is that, for nearly all of American history, the light-skinned Jesus conjured up by most white congregations was not merely indifferent to the status quo of racial inequality; he demanded its defense and preservation as part of the natural, divinely ordained order of things.”