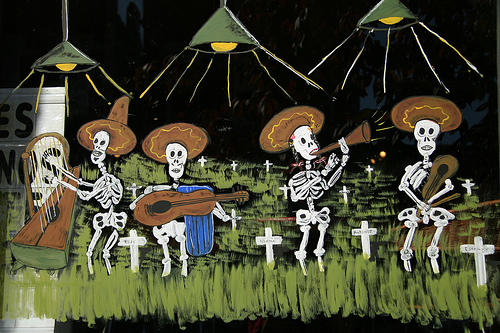 Is celebrating a holiday that honors ghouls, demons, ghosts, and everything that goes bump in the night dangerous or even evil?

Somewhere, in the halls of history, Halloween or All Hallows Eve, got hijacked. What started as a day to prepare for All Saints’ Day (November 1st), Halloween became a spooky, evil, and candy filled observance. The term “Halloween” from its beginnings, had nothing to do with any pagan or evil beliefs. The Christian festival All Hallows Eve morphed into our current term Hallowe’en.

The key in understanding of the origins of the term Halloween comes from the sense of what is “hallowed” or “holy”. In the Lord’s Prayer, Christians pray, “Our Father, in heaven, hallowed be your name…” In the fourth century, John Chrysostom tells us that the Eastern church celebrated a festival in honor of all saints who died. In the seventh and eighth centuries, Christians celebrated “All Saints’ Day” formally.

How did Halloween become associated with evil spirits? When we look at history we discover:

More than a thousand years ago Christians confronted pagan rites appeasing the lord of death and evil spirits… the druids, in what is now Britain and France, observed the end of summer with sacrifices to the gods. It was the beginning of the Celtic year, and they believed Samhain, the lord of death, sent evil spirits abroad to attack humans, who could escape only by assuming disguises and looking like evil spirits themselves. The waning of the sun and the approach of dark winter made the evil spirits rejoice and play nasty tricks.

If the Christian observance of Halloween began with a religious focus, how can we reclaim Halloween from its current feared status? Here are 7 ways Christians can take back Halloween:

1. Understand that All Hallows Eve (Halloween) and the ancient pagan festival of Samhain are not the same. Halloween is often associated with the pagan concept of Samhain, the festival where ancient pagans believed that the worlds of the living and dead would been thinly divided. But, we have seen from the other ancient pagan festivals associated with Christmas and Easter that these pagan connections do not serve as a reason why we cannot celebrate a Christian holiday. Despite claims by modern Wiccans and Druids, no one really knows what happened during Samhain. There is not one shred of evidence of what actually took place. Not authentic historical accounts. History has proven that the Christianizing of the calendar has created a rich heritage of faith and spirituality rather than something more evil. Gregory III (731–741) and Gregory IV (827–844) moved the Christian holiday All Saints’ Day from May 13 to November 1 to replace the pagan rituals on October 31 and November 1. Gregory III instructed people to dress up as saints . Let the occult have Samhain, we are taking All Hallows Eve back.

2. The establishment of Christmas and Easter in Europe had pagan connections but we do not abandon these holidays. Neither should we abandon All Hallows Eve. Much of the beef of conservative Christians surrounding Halloween is centered around how pagan observances where mash together with Halloween. Most Christians may not understand that Christmas was opted for a December observance because of the Nordic holiday of Yule (ever heard of a Yule log?) Many scholars believe that Jesus’ birthday was in fact during warmer months rather than colder months. For the ancient pagans, in the beginning of the winter solstice, the days became shorter and the weather became much colder. As a pagan observance, the Scandinavian cultures would keep a fire going with a giant tree or log for people often made sacrifices before an oak tree for a period of 12 days… a connection with the 12 days of Christmas? Not to mention the Christmas tree. Pagans would burn or use evergreens in their festivals.

The observance of Easter is the celebration of Christ’s resurrection. However, The modern English word “Easter“ can be traced to an older English word Ēastre or Ēostre or Eoaster, which refers to Eostur-monath, a month that the Germanic peoples named after the goddess Ēostre. If the word Easter has connections to pagan rituals of celebrating the spring time, does that devalue Easter? No.

3. Understanding that early Christians contextualized early pagan holidays into Christian holidays helps us to see that we do not have to compromise our beliefs with pagan ones. Anthony McRoy, a Fellow of the British Society for Middle East Studies at Wales Evangelical School of Theology reminds us:

Of course, even if Christians did engage in contextualization—expressing their message and worship in the language or forms of the local people—that in no way implies doctrinal compromise. Christians around the world have sought to redeem the local culture for Christ while purging it of practices antithetical to biblical norms. After all, Christians speak of “Good Friday,” but they are in no way honoring the worship of the Norse/Germanic queen of the gods Freya by doing so.

4. “Evil” themes in our current secular Halloween observances were not always present. Thus, we can recapture the spiritual with the innocent. Halloween does not have to be a holiday filled with Draculas, bloody masks, or witches. There was a time when children dressed up, but their costumes were not sinister. Sue Ellen Thompson’s book Holiday Symbols records that during the Great Depression, “children often disguised themselves as hobos, burglars, pirates… in other words, as economic and social outcasts, symbolic of the troubles from which their parents were struggling to escape.” (link) Those children were trying to make light of their situation. In many cultures, taunting or comically characterizing personal cultural strife was a way of triumphing over that which could not be over come in their collective psyche.

Elesha Coffman wrote , “Festival of Fears”, in Christianity Today that Halloween in the 19th century were devoid of scary masks and monsters:

Mainstream Halloween celebrations in the Victorian era were generally tame and devoid of occult overtones. Instead of pulling pranks or haunting neighborhoods, young people chatted and flirted in festooned parlors. By the beginning of the twentieth century, some towns had gone so far as to make Halloween primarily a civic affair, complete with parades and block parties.

5. If you still think Halloween is an evil day, then maybe you should see All Hallows Eve as a time when Christians can laugh and even mock evil. Anderson M. Rearick, assistant professor of English at Mount Vernon Nazarene College in Ohio, challenges us to rethink Halloween:

Should the forces of evil be mocked? Should Satan be laughed at? He most certainly should be. At the beginning of The Screwtape Letters, C. S. Lewis includes two telling quotations, the first from Martin Luther: “The best way to drive out the devil, if he will not yield to texts of Scripture, is to jeer and flout him, for he cannot bear scorn.”

The second comes from Thomas More: “The devil … the proud spirit cannot endure to be mocked.”

The one thing Satan cannot bear is to be a source of laughter. His pride is undermined by his own knowledge that his infernal rebellion against God is in reality an absurd farce. Hating laughter, he demands to be taken seriously. Indeed, I would say that those Christians who spend the night of October 31 filled with concern over what evils might be (and sometimes are) taking place are doing the very thing Lucifer wants them to do. By giving him this respect, such believers are giving his authority credence.

Christians should instead celebrate Halloween with gusto. If we follow the traditional formula of having a good time at his expense, Satan flees.

By laughing, mocking, and even “cartooning” evil by goofy costumes we can take a posture of triumph with Christ.

6. Christians should focus and teach the concept of celebrating All Saint’s Day, November 1st in churches.
The term “saint” is used over 60 times in the New Testament. We protestants use the word saints to describe the Christians living and dead. We can also honor our loved ones who have given us Christ, such as our parents, grandparents, etc… We thank God for them and pray that the living “saints” may live in community. Churches can use All Saints Day to light candles as an act of prayer for thanking God for the special people (“saints”) in our lives.

We can also learn from the saints of the church for the last 2,000 years. We protestants have often been fearful of honoring and learning from the Church saints for fear that we are venerating them as Catholics do.

7. Christ holds the “keys to death and Hades” (Revelation 1:18). We can take comfort in the fact that Christ defeated death. Even the mere name of “Jesus Christ” can make evil shutter and even follow the commands of God. When Jesus confronted evil demons in the New Testament they were fearful and obeyed the commands of Jesus to leave the people they possessed. Much of the outcry concerning Halloween comes from the fear of evil or welcoming evil into their homes or lives. No one should go out and look for spiritual warfare, but we should take comfort in knowing that Christ has given us the tools to fend away evil: faith in God, scripture, the power of Christ, the Holy Spirit, fasting, and prayer.

Why should Christians allow others to claim Halloween as their own? We should not. We should take back All Hallows Eve by embracing All Saints Day and remembering our “saints”. By separating All Hallows Eve from the pre-Christian practices, Christians can take comfort in understanding the historical Christian remembrance that is associated with All Hallows Eve and All Saints Day. Children can collect donations for UNICEF or for a local cause. We Christians can also view Halloween as a fun event for children by having events in churches or in our communities where children and their parents can dress up, play games, and share some treats in a safe place.