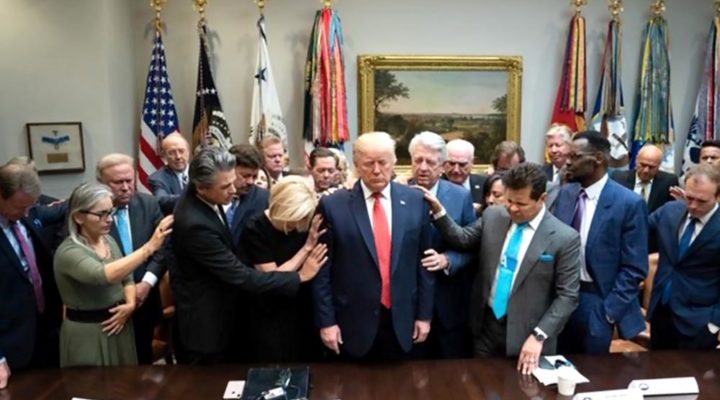 i
Evangelicals pray for President Trump in 2019. i
Evangelicals pray for President Trump in 2019.

Numerous conservative pastors and commentators have declared to their flocks that true Christians must vote Republican if they are faithful. Chief among those is Al Mohler, president of Southern Baptist Theological Seminary, who told a conservative political action group this fall that to vote for Democrats makes them “unfaithful to God.”

But what if he’s got it backward? What if voting for today’s iteration of the Republican Party — driven by the business of white supremacy more than actual business interests — makes one “unfaithful to God”? In America 2022, in the Age of Trump, is voting Republican the only way to be faithful to God? And is such a vote actually being faithful to God at all?

I doubt I can convince anyone who doesn’t already think as I do, but at times one must speak clearly, even to “an impudent and stiff-necked people” whether “they will hear or whether they will forbear” (Ezekiel 2: 4-6).

I grew up in Alabama in the bosom of the Greek Orthodox Church — baptized as a baby, an altar boy by age 12, kissed the feet of the icon of St. Michael every Sunday to thank him for saving my life (another story for another time). I probably already was a Christian before the Jesus Movement followed the Civil Rights movement through my hometown, Birmingham, and plucked me away from the church of my fathers (and mothers). Fifty years ago, I “asked Jesus into my heart” and left the Orthodox Church, eventually becoming a Baptist. Four years later, I was ordained a Southern Baptist minister.

Around the same time, one of my political heroes was Abraham Lincoln. I also noticed that my mother usually voted for a now-obscure Republican named Jim Martin, who two or three times fell victim to the George Wallace gubernatorial juggernaut. Having grown up around conservatives, the 18-year-old me cast his first vote for Richard Nixon and I cried (for my country, not for him) two years later when he resigned the presidency.

But today, visiting the Pew Research Center website, I took a quiz asking, “Where Do You Fit in the Political Typology?” One particular question caught my attention, “On a scale of 0-10, how do you feel about the Republican Party?” (There was, of course, a matching question regarding the Dems.) I gave today’s Republican Party a flat-out zero. Here’s why:

First, 58 years of the Southern Strategy. Barry Goldwater invented it in 1964. That was the year my mother voted for Lyndon Johnson, and in my fourth-grade mock election, so did I.

“Nor did I realize that gloating about LBJ’s victory on the day after the election would bring me so very close to getting my butt kicked.”

Most of my classmates asked, “Why did you vote for him? Don’t you know he’s for the n****rs?” No, I didn’t. Nor did I realize that gloating about LBJ’s victory on the day after the election would bring me so very close to getting my butt kicked.

Then the Nixon campaign gave it an official name. And since then, every Republican presidential candidate, to one degree or another, has exploited the anti-Civil Rights backlash (otherwise known as “white supremacy”) that “in the twinkling of an eye” raptured all the Democrats out of the formerly “Solid South” and beginning with South Carolina’s Sen. Strom Thurmond, replaced them all with deep-red Republicans. Somehow, I couldn’t see Jesus voting that way.

Second, anti-immigration. My grandmother came to America before Mussolini and Hitler could overrun her Aegean Island of Karpathos in 1923. She learned to love FDR and Paul “Bear” Bryant. Early 20-century nativists, however, didn’t take long before they attached the N-word to people like me — in my hometown of Birmingham and in my church of “foreigners.”

WASPish moms and dads who apparently scored near the bottom of the parenting IQ tests allowed sororities to exist in our town’s high schools — and allowed some of their daughters to “blackball” my beautiful Greek sister from Phi Kappa Nu, a social trauma that haunted her for years. So much for rush in a “Greek” system.

“I can’t imagine Jesus of Nazareth slamming doors in the faces of citizens of the world hoping to find in the U.S. a ‘sweet land of liberty.’”

Somehow, conservative Southern Democrats and Republicans cling much more tightly to America’s xenophobia than its “huddled masses yearning to breathe free.” Somehow, I can’t imagine Jesus of Nazareth slamming doors in the faces of citizens of the world hoping to find in the U.S. a “sweet land of liberty.”

Third, Trumpian prevarication (lying). The Gospel of John depicts a Jesus who loved truth that with grace would set the world free. But today’s Republican Party is so drunk with the power Donald Trump gave them “right out loud” to hate Blacks, browns, the Latinx, LGBTQs, willing to bear all manner of false witness against their neighbors, equating Democrats with pedophiles who drink the blood of babies.

He lied about crowd sizes, about “shithole countries,” about Mexicans, about new diseases and how many people were dying from COVID (I was almost one of them, by the way), about fraudulent claims of voter fraud, about stolen elections, about when he knew the January 6 crowd was armed, about being Mike Pence’s friend while his pals built gallows for him on the Ellipse, about what is in all those government documents he spirited away to Mar-a-Lago, and why he wanted them in his possession in the first place.

Fourth, Republican “anti-violent crime” policies. Ever since I voted Republican in the 1972 election, the Republican Party has declared its fealty to “law-and-order” and painted Democrats as “soft on crime.” Republicans even now are blaming their opponents for the crime problem and assuring fearful Americans that they will tame America’s criminals by building and filling more and more prisons.

That is, unless it is crime perpetrated by right-wing Republicans. Donald Trump already has promised to pardon all January 6-ers who have been convicted in our courts if, God forbid, he ever returns to the White House.

“Donald Trump already has promised to pardon all January 6-ers who have been convicted in our courts.”

And now, when the 82-year-old husband of Nancy Pelosi is attacked in their own home by a “patriot” who fractured his skull with a hammer and put him in ICU, an Arizona gubernatorial candidate jokes about the Pelosi home “not being very well protected” to the enthusiastic guffaws of her audience.

And what of the Republicans who excuse their “warrior for God” when he put a gun to his ex-wife’s temple and threatens to “blow her brains out” while asking Georgians to send this Heisman Trophy winner to represent us in the U.S. Senate? If Joseph Welch were still alive, would he not exclaim to this dying political party, as he did to Sen. Joe McCarthy: “At long last, Republicans, have you left no sense of decency?”

Fifth, misogyny masquerading as being “pro-life.” If Republicans really were Christian and really were pro-life, they would do something about gun violence in America that has killed so many of our school children. Or they would support policies that improve the lives of the post-birth babies who suffer food insecurity every day of their lives. Patches are offered for sale by a vendor during a Second Amendment March outside the Michigan state capitol building September 23, 2021 in Lansing, Michigan. (Photo by Scott Olson/Getty Images)

Yes, we all wish abortions were not sometimes necessary. But American women are the equals of our men, and they have the right to make their own choices about their families without Republican politicians sticking their noses in these families’ business. Nor do they deserve Republicans forcing them to have their own rapists’ offspring.

And being “pro-life” is about more than abortion.

Sixth, fear of losing their privileged status. Today’s Republicans love the tough talk of their political heroes. But the prospect of competing with other religions in America’s free market of religion makes their teeth chatter. So, the anti-government party wants Congress to declare America to be a “Christian nation.”

They want the government to bolster the status of Christianity in America — a temptation Jesus rejected when Satan offered him “all the kingdoms of the world.”

In 2016, I read a Facebook post from one of my college friends indicating he would vote for Trump because “he was the only one who will protect us Christians.” Republicans must not have heard the news that religious belief, practice and institutions have thrived in the U.S. because they did not enjoy the favor of the government.

Instead, the churches had to work to spread the gospel and strengthen church life in America. Contrast the health of religion in America, where there has been no officially favored religion (even if, historically, most Americans have been Christians), with religion in most European countries where state churches once abounded but are now virtually empty.

“When you’ve been king all your life, equality feels like a demotion.”

Because Protestant Christians have been the majority for so long, they have had cultural dominance for most of our history on this continent. As I have said to students for years, “When you’ve been king all your life, equality feels like a demotion.”

The latter half of the 20th century demoted white Protestants to the status of equality with Americans of other races and religions. And for the last 50 years, conservative Protestants have whined and begged to have Caesar come back to protect them from Americans who, against all odds, chose to come to our shores in order to become Americans.

I’ve said enough already. Given more time and space, I probably could come up with a perfect seven. (Or if you like numerology, perhaps 10 or 12.} But for the sake of brevity, I’ll stick with these six reasons. Rather appropriate for such an Antichristian political movement.

May God have mercy on all our American souls.