God is not a political football 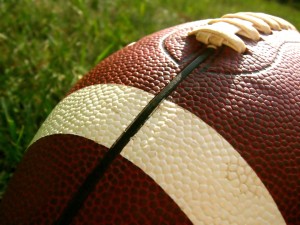 In football, you want to move the ball forward towards the end zone. You want to exploit the weaknesses of your opponent. If they carry the ball too high on their pads it is an easy target to strip the ball for a fumble. If the quarterback drops the ball it is an opportunity for the other team to gain control.

At the Democratic Convention this year, the Democrats had a fumble of their own. it was brought to the attention of delegates that the mention of “God” was omitted from the party’s platform. In a hasty attempt to correct this, the Democrats wanted to move the “God ball” forward quickly and without anyone taking note of their “mistake”. Republicans were quick to jump on this and decried the action as an attack on religion that was uncovered.

God suddenly became a political football that could be controlled, voted on, thrown, approved, and used as a political tool.

This past week I heard two people discussing these series of events. I overheard one bemoan the Democrats and their godless agenda to over throw religion in American. “Isn’t that awful! I’ll never vote for a Democrat ever again.” Another replied, “That’s why we have to get rid of this godless party of atheists! Mitt Romney is my man!”

Truly, it appears that both political parties are raising the issue of God-talk as a way to appeal to specific voters, namely Evangelical voters. God is being used as a way to say, “Look, we are more appealing than the other guys! Look at us!” And, God is being used to say, “Oops, we made a mistake, we really do believe in God. See! We put it back in!” Jesus said, “Beware of practicing your piety before others” and “And when you pray, you must not be like the hypocrites. For they love to stand and pray in the synagogues and at the street corners, that they may be seen by others.”

If mentioning “God” in a party’s platform is tantamount to the deepest most pious expression of faith, then we have lost our way in understanding Jesus and the Bible.

If you want to measure a party’s platform in God-talk, then apparently in 2000 the Republicans weren’t very godly because God only received one mention. In 2006, two mentions. The GOP upped the ante with 12 mentions in 2012. Touchdown! Democrats had a declining God record: 7 mentions in 2004, 1 mention in 2008. Tisk, tisk.

In all reality, Christians need to see past this game of the political God football. God being passed to and fro as if God can be used to elicit votes for Mitt Romney or Barack Obama The letter of James reads strongly about faith and works: “Faith without works is dead”. You can have all the religious words and beliefs of faith, but if you do not have works to confirm your faith, it’s a dead faith.

I really do not think God is impressed with a political spike of the football in either party platform. Yes, you mention God, but how are you carrying out the commands of Jesus? Loving your neighbor and God? Caring for the poor? Loving God with all your heart, mind, and soul?

These are the commands of Jesus, not mine or a political party’s. No political party can claim that God is on their team and not the other. God is not a product, talking point, or player to trade in the draft, but the ultimate creator, sustainer, and savior of the universe.