In a move breaking with decades of Southern Baptist Convention tradition, SBC President Ed Litton, pastor of Redemption Church in Mobile, Ala., announced in a video statement March 1 that he does not intend to seek a second term as president of the nation’s largest non-Catholic denomination. File photo of Adrian Rogers preaching at an SBC meeting in the late 1970s.

The last SBC president not to seek re-election for a second one-year term was Adrian Rogers in 1980. Rogers was the first in a line of presidents elected to lead the so-called “conservative resurgence,” which turned the denomination in a decidedly conservative direction. Rogers later ran again and served two more years as president from 1986 to 1988.

For three decades prior to 1980, no SBC president served more than one successive term.

Citing “painful conflicts and intense discussions” currently ongoing in the SBC, Litton made the announcement of his abstention from the presidential race while also going into more detail regarding a new “gospel-based (racial) reconciliation initiative” he plans to present to the churches at the June annual meeting in Anaheim, Calif. He had also announced these plans for a racial reconciliation initiative last week in his address to the SBC Executive Committee.

Further, Litton again acknowledged and apologized for his “own failures and shortcomings for mistakes” he allegedly “made in the preparation and delivery of particular sermons” — referring to a scandal that has plagued his presidency since allegations of sermon plagiarism were made mere weeks after his election to the office last June.

Litton has presided over a tumultuous year within the SBC, with rancor over an investigation into alleged mishandling of sexual abuse cases by SBC officials, the resignation of the president of the SBC Executive Committee and unceasing criticism from the Conservative Baptist Network, which has employed nearly identical tactics to the architects of the “conservative resurgence,” vehemently opposing Litton, and even  in July 2021 called for his resignation. 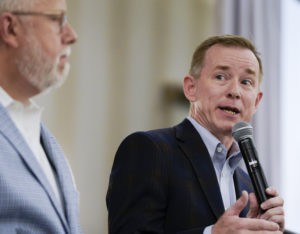 Today’s announcement likely will create a political situation in the SBC more crowded and volatile than last year’s four-person race.

In view of Litton’s announcement, multiple SBC pastors and leaders communicated their admiration for Litton. Former SBC President James Merritt said in a statement on Twitter, “I have the deepest love and respect for @EdLitton who regardless of any other narrative is a true man of God who loves his Lord, his church and his denomination. This was a selfless decision that God will honor, and I commend and admire and thank him for his service to the SBC.”

Brent Leatherwood, acting president of the SBC Ethics and Religious Liberty Commission, also took to Twitter to communicate his appreciation for Litton: “I consider it a privilege to have been able to work alongside him during his time as SBC president. Important work still to be done. I’m looking forward to helping him run through the finish line in Anaheim.”

Danny Akin, president of Southeastern Baptist Theological Seminary and one of Litton’s endorsers in last year’s race, tweeted: “Thank you @EdLitton for your service and visionary leadership of our Convention of churches. I love you my brother. You have served us well and your vision for our future is one all Southern Baptists can embrace.”

Others did not leave such glowing reviews of Litton’s leadership. East Texas pastor Tom Buck, a vocal online conservative critic of SBC leadership, tweeted that he thought it would be best if Litton stepped down immediately and let SBC First Vice President Lee Brand, a member of the Conservative Baptist Network Steering Council, take over as a “great first gesture toward his own stated goal” of racial reconciliation. Litton is white; Brand is Black.

The SBC annual meeting is set to take place June 14-15.