Companions of Jesus: partnering with followers of other faiths to pursue God’s vision of peace 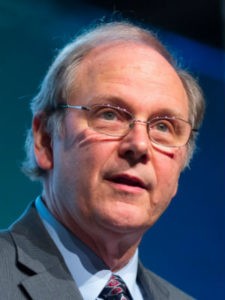 In the prophetic words of the late Baptist journalist Walker Knight, “Peace, like war, must be waged.” A trip to Abu Dhabi during the Advent season reminded me that waging peace is a passion shared by persons of all faiths.

At the invitation of the Forum for Promoting Peace in Muslim Societies, I traveled to the United Arab Emirates to join hundreds of religious leaders, clerics, academics, practitioners and activists from Judaism, Christianity and Islam at a conference on global peacemaking.

During this sixth convening of the Forum, a “Charter of a New Alliance of Virtue” was confirmed. This revolutionary document puts into powerful words the vision articulated five years ago by respected Muslim scholar and president of the Forum, H.E. Shaykh Abdallah bin Bayyah. The covenant, ratified in both Arabic and English, calls for “the elevation of virtues as understood by the three Abrahamic religions in the service of peace, tolerance and mutual understanding between all peoples irrespective of race, ethnicity or religion.”

“I want to serve God’s mission in the world by engaging in interfaith friendships across lines of racial, cultural and religious distinction.”

The charter, which in my view is similar in scope and potential influence to the 13th-century Magna Carta, is grounded upon the principles of “human dignity, freedom of conscience and religion or belief, tolerance, justice, peace, mercy, kindness, keeping covenants, and solidarity.”

While spending a week of Advent in a Muslim capital might strike some as a non-conventional use of resources, I can think of no more appropriate way to anticipate the coming of the Prince of Peace into the world than to carry my Christian convictions into a vibrant setting where strategies for global peace are being shaped. It was the spirit of Jesus, whose earthly life was radical, surprising and expectation-bending, that compelled me to work, discuss and fellowship at table with Muslim imams, shaykhs and muftis; Jewish rabbis, sages and Torah scholars; and Christian priests, pastors and academics.

Invitees who identify as Christ-followers were a diverse, ecumenical group from various countries. But for all our denominational differences, we had one significant trait in common: all of us were there as companions of Jesus.

To name but three, that designation is certainly true of Father Patrick McInerney, a Catholic priest of the Missionary Society of St. Columban in Sydney, who has worked in Christian-Muslim relations in Pakistan and Australia for decades. The identity fits Kathryn Lohre, former assistant director of Harvard University’s Pluralism Project, who strategically leads ecumenical and interreligious relations for the Evangelical Lutheran Church of America in Chicago. And it describes Bob Roberts Jr., a Baptist pastor from Keller, Texas, who is recognized internationally as an evangelical who has built relationships with people from every faith, including those who are often maligned and feared.

The term “companions of Jesus” dates from the fourth chapter of the book of Acts. The rulers, elders and scribes in Jerusalem sat in judgment over apostles Peter and John, who had been accused of stirring up crowds with their God-talk. One thing set them apart from many others who had previously been brought to trial was the recognition that these two ordinary, uneducated fishermen had been “companions of Jesus” (Acts 4:13).

This phrase is intriguing and profoundly rich in its implications for followers of Christ. In everyday usage, a “companion” is understood as “a person with whom one spends a lot of time or with whom one travels.”

Companions spend a lot of time together. They are friends who work, play, eat, sleep, listen, talk, laugh, weep, reflect, pray, sit and walk in one another’s company. Companions don’t meet only once a week for a couple of hours or rely on the chance meeting, but instead intentionally decide to live in an active, growing and lasting relationship. They do not measure their moments by the clock, restlessly awaiting the opportunity to get to the next appointment, but unhurriedly spend time enjoying whatever they are doing, as long as it is done together.

Companions are more than acquaintances. They are on a first-name basis with one another, but in a way that surpasses the ordinary interpersonal connection. Friends, even good friends, often exult in the fact that they can be separated for days, weeks, months or years at a time yet renew their friendship easily, “picking up right where they left off.” But companions are friends who communicate frequently, regularly and consistently. Their ability to complete one another’s thoughts and their freedom to feel no awkwardness or hesitation simply to be themselves are shaped by that continual and comfortable relationship.

Companions travel with one another. This kind of ongoing companionship requires planning and commitment. Schedules have to be synchronized and destinations coordinated. Traveling companions go the same places at the same time. A person cannot be someone’s companion by traveling alone or by taking the rare or infrequent journey together.

“If we are to be recognized as companions of Jesus, we must go where he is traveling.”

One of my earliest sermon outlines, drafted in college more than 50 years ago at a time when I thought homilies needed three points and alliteration, was about going where Jesus went. I suggested that we who are his disciples must go to Galilee, the place of service; Gethsemane, the place of submission; and Golgotha, the place of sacrifice.

Today if I were to preach on this theme, I wouldn’t be bound by such a sophomoric understanding of good homiletics, but the topic is still relevant and true. If we are to be recognized as companions of Jesus, we must go where he is traveling. Our lives, like his, must be marked by service, submission and sacrifice.

After spending time with Patrick, Kathryn, Bob, and other new Christian friends during our four days together in the Emirates, it was clear to me that these sisters and brothers spend lots of time with Jesus and go where he leads them.

Like them, I want to serve God’s mission in the world by engaging in interfaith friendships across lines of racial, cultural and religious distinction. I want to join with Muslim counterparts, whose very name means “those who submit to God,” in submission to the Prince of Peace by living as a peacemaker. Moreover, while what is asked of me is less demanding than what many others experience daily in difficult and even life-threatening circumstances, I am committed to work for positive change, even if it requires risk and personal sacrifice.

Recently I celebrated another birthday. Well into my senior years now, I am beginning to think about what I will leave behind when I’m gone. No personal tribute would be better than to be viewed by others as a companion of Jesus, albeit a very imperfect one. I would like to be known as one who attempted radical, surprising and expectation-bending actions because of my faith. This is a legacy I hope to leave my children and grandchildren.

My life will have been successful, not because of what I have accomplished, but because of the Christ who has been my faithful companion.