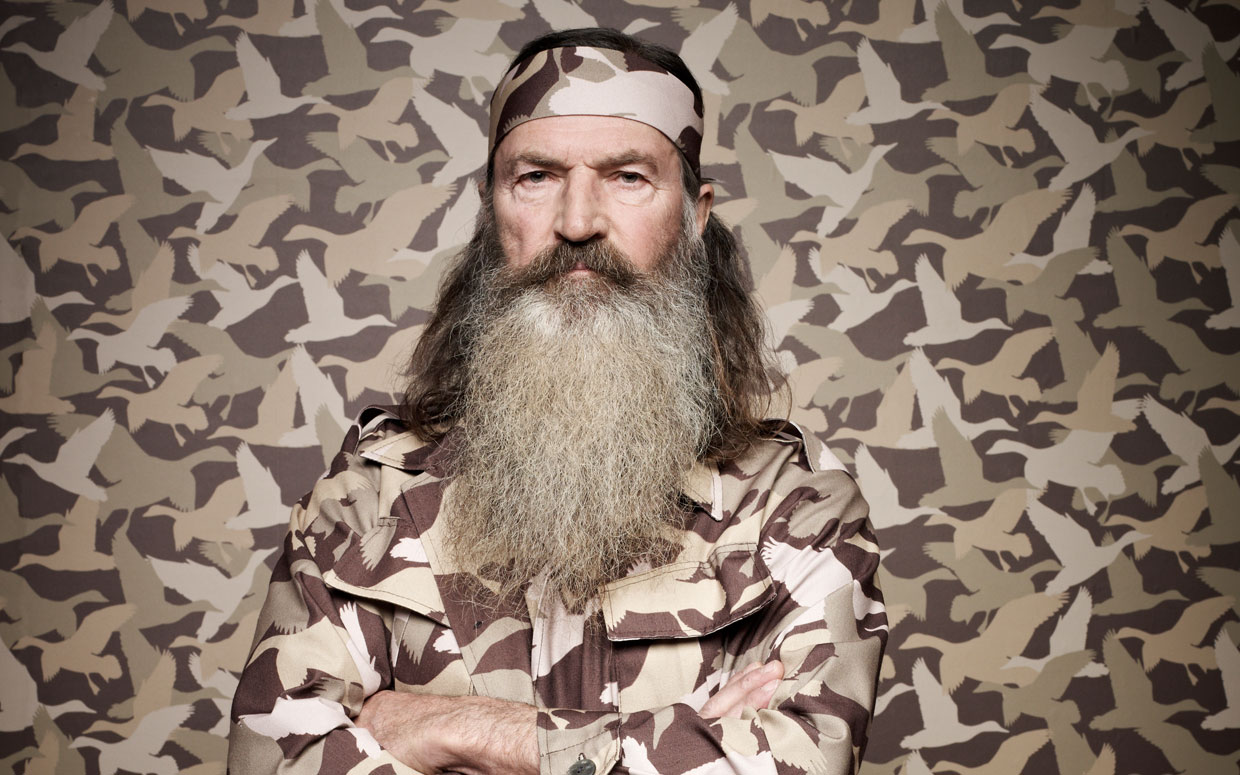 By now you have heard about controversy involving ‘Duck Dynasty’ A&E  star Phil Robertson. Robertson, recently spoke to GQ about his personal beliefs:

Start with homosexual behavior and just morph out from there… Bestiality, sleeping around with this woman and that woman and that woman and those men… It seems like, to me, a vagina — as a man — would be more desirable than a man’s anus. That’s just me. I’m just thinking: There’s more there! She’s got more to offer. I mean, come on, dudes! You know what I’m saying? But hey, sin: It’s not logical, my man. It’s just not logical…

In addition, Robertson made controversial comments on race. Phil Robertson was recently suspended by A&E because of his statements. Louisiana Governor Bobby Jindal responded to the controversy by saying,

I remember when TV networks believed in the First Amendment. It is a messed up situation when Miley Cyrus gets a laugh, and Phil Robertson gets suspended.

Sarah Palin responded on her Facebook page with the message:

Free Speech is an endangered species….Those ‘intolerants’ hatin’ and taking on the Duck Dynasty patriarch for voicing his personal opinion are taking on all of us.

First and foremost, Robertson’s show is a produced television entertainment venture on a channel label as “Arts and Entertainment Television”. Whatever contract that Robertson signed with A&E is a private contract and has nothing to do with governmental rights contained the First Amendment. Entertainment personalities sign a contract with their check signers that include a clause that state that based on actions and/or public comments, their agreement with said entertainment personality can be in jeopardy.

Phil Robertson, who has an undergraduate and master’s degree, has every right to say what he said. There is no government oppressing his First Amendment rights as some have tried to decry. He signed a private contract with a private company. That private company took private action to address statements made by a private individual who has a financial interest in a private company.

This is not a First Amendment issue. Anyone who says otherwise is misinformed. No matter your opinion on race or homosexuality, you cannot claim his rights have been violated by the First Amendment. The First Amendment protects against governmental action against speech, not private companies’ actions.

Feel free to agree or disagree with Phil Robertson. However, don’t claim his First Amendment rights have been violated. Congress, the Federal government, or its representatives have not infringed upon his rights.  A private company in which he had a private contact with decided to take action. Free speech means we are free to say what we want (without yelling fire in a crowded theater) without governmental intrusion. Free speech doesn’t mean free of consequence.

For everyone claiming persecution is unjust against Robertson, remember what Jesus said to his disciples, “You will be hated by all because of my name. (Luke 21:7) And, in 2 Timothy 3:12 , we read “Everyone who wants to live a godly life in Christ Jesus will be persecuted.” With free speech and personal belief will come ridicule for Christians who take a public stand, no matter how right or wrong their words are.

Please, let us delineate between constitutional violation and socially uncouth expressions of personal belief. Let’s be able to express our beliefs without shaming, demeaning, or mistreating one another.