In an open letter to his former church, Southern Baptist Convention leader Johnny Hunt admitted to inappropriate behavior with a woman in 2010 but denied he sexually assaulted her as alleged by the woman and her husband.

The incident was highlighted in the May 22 report issued by Guidepost Solutions after its independent investigation into alleged mishandling of sexual abuse cases in the SBC. One week before the report was released, Hunt abruptly resigned as senior vice president at NAMB.

About an hour and a half after release of the Guidepost report on Sunday, Hunt issued a statement via Twitter denying the allegations of abuse: “I vigorously deny the circumstances and characterizations set forth in the Guidepost report. I have never abused anybody.”

Five days later, Hunt issued an open letter admitting to inappropriate behavior with the pastor’s wife but denying that it was a sexual assault. In one passage of the letter. He said on July 25, 2010, he allowed himself “to get too close to a compromising situation with a woman who was not my wife” which he described as “an awful sin” but a “consensual encounter.”

He said on July 25, 2010, he allowed himself “to get too close to a compromising situation with a woman who was not my wife” which he described as “an awful sin” but a “consensual encounter.”

Hunt’s statement was made public on Facebook and Twitter Friday afternoon, May 27. It was addressed to the membership of First Baptist Church of Woodstock, Ga., where Hunt served as senior pastor for three decades.

The executive summary of the Guidepost report concluded the following about Hunt: “During our investigation, an SBC pastor and his wife came forward to report that SBC President Johnny Hunt (2008-2010) had sexually assaulted the wife on July 25, 2010. We include this sexual assault allegation in the report because our investigators found the pastor and his wife to be credible; their report was corroborated in part by a counseling minister and three other credible witnesses; and our investigators did not find Dr. Hunt’s statements related to the sexual assault allegation to be credible.”

In that report, Hunt is accused of assaulting the pastor’s wife (identified as “survivor”) in a beachside condo which he allegedly had arranged for the couple to rent. One passage in the Guidepost report described the act of the assault:

“Dr. Hunt then moved towards survivor and proceeded to pull her shorts down, turn her over and stare at her bare backside. He made sexual remarks about her body and things he had imagined about her. During this time, survivor felt frozen. Survivor said these were some of the longest moments of her life. She mustered the courage to ask him could she turn back over, and Dr. Hunt said yes. When she turned back over, she began to pull up her shorts. Dr. Hunt then pinned her to the couch, got on top of her, and pulled up her shirt. He sexually assaulted her with his hands and mouth. Suddenly, Dr. Hunt stopped and then stood up. Survivor pulled down her shirt. Survivor said she did not want him to ruin his ministry, at which he responded he did not want to ruin hers. But he then forced himself on her again by groping her, trying to pull her shirt down, and violently kissing her. Survivor did not reciprocate, but rather stood eyes open and very stiff, hoping he would just stop and leave. He finally stopped and left.”

In his three-page statement to the Woodstock church May 29, Hunt confirmed the encounter but denied the details as offered in the report.

“With God as my witness while the situation described in the Guidepost report is based in reality, the allegation made in the report is false.”

“As I said in my statement on Sunday: I have never abused anybody. With God as my witness while the situation described in the Guidepost report is based in reality, the allegation made in the report is false. I also am sorry I wasn’t more forthcoming with the interviewers because it has made a bad situation worse. I guess I was just so surprised and so shocked by the allegations of abuse that I shut down.”

Hunt apologized for his actions, asked for forgiveness and said he was submitting himself to a small group for “intentional restoration.”

Hunt’s latest public statement comes just four days after Southeastern Baptist Theological Seminary President Danny Akin released a statement on Monday indicating he had begun “immediately initiating serious discussions with my cabinet as to what needs to be done in response to these allegations,” including disassociating Hunt’s name from an academic chair, an academic degree program, and “other items.”

NAMB leaders also issued a statement on Sunday confirming Hunt had resigned from the mission agency on Friday, May 13, with NAMB President Kevin Ezell saying, “I was not aware of any alleged misconduct on the part of Johnny Hunt. I learned the details of the report today along with the rest of our Southern Baptist family.”

NAMB also issued a second statement Wednesday, May 25, encouraging survivors of abuse to reach out to a hotline Guidepost Solutions has created for survivors.

Both as a pastor and a missions agency leader, Hunt was a frequent guest preacher at churches and events across the nation. At Woodstock, he created a much-celebrated program for “hurting pastors” and their families. That residential program, called City of Refuge, has served pastors who experienced “infidelity, addiction, abuse of power or other moral failings.”

Hunt was a friend and frequent companion of high-profile apologist and evangelist Ravi Zacharias who, after his death was discovered to have abused multiple women with “sexting, unwanted touching, spiritual abuse and rape.” Hunt even prayed a blessing over the grand opening of one of Zacharias’ health spas where, it was later revealed, Zacharias was abusing women who were his employees.

Initially, Hunt defended his friend, but as the unassailable evidence of an independent investigation mounted, Hunt backed down and joined the chorus against his friend. 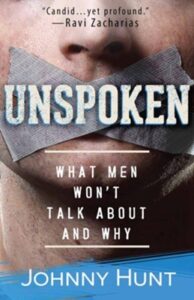 On Feb. 13, 2021, Hunt tweeted: “To read the final investigative report on Ravi Zacharias was gut wrenching and causes my heart to feel sick. I have prayed for his wife and 3 children. Sin is always against God and in this case against so many innocent women. May God show each one mercy! So HARMFUL! God help us.”

In 2018, Hunt published a book titled Unspoken: What Men Won’t Talk About and Why. It is billed as a help for men with “unspoken struggles” that “wrench you down into isolation and distract your thoughts.” The book’s publicity says Hunt will give men “the courage to overcome your stumbling blocks and step into a new life, free from the bondage of shame and silence.”

Ironically, Zacharias was one of the prominent endorsers of that book, along with a who’s who of Southern Baptist leaders. After the revelations of Zacharias’ failings became known, Hunt removed the Zacharias endorsement from future editions and online publicity.