Get on your sweaters: ‘Christian Girl Autumn’ is here

As Thanksgiving comes closer, Christian women everywhere are going into their closets and pulling out their jeans, sweaters, infinity scarves and flannels. That’s right folks — Christian Girl Autumn is here.

The running online joke, that all Christian women dress alike in the autumnal months, goes back to a since-deleted Tweet from 2019 on the account @lasagnabby. This account no longer exists on Twitter, but new content from the user may be found on Blizzy McGuire’s Tik Tok page. 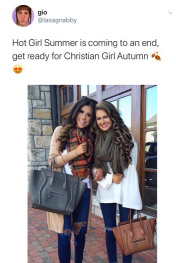 The user posted a tweet saying, “Hot Girl Summer is coming to an end, get ready for Christian Girl Autumn,” along with a photo of two women dressed in jeans, sweaters, chunky scarves and matching ankle booties and leather purses.

The tweet quickly went viral, and Twitter users flooded the thread, stereotyping the women in the photo with negative jokes and comments. Although the original post made no assumption about the women’s personalities, many of the responses were negative. They assumed they were ignorant, homophobic and otherwise discriminatory or rude.

But then, the unexpected happened. The two women — Emily Gemma (left) and Caitlyn Covington (right) — responded. Gemma and Covington thought the original meme was funny, but they wanted to make sure Twitter users knew the truth about them. Buzzfeed interviewed the women, and Covington told them, “I’m a nice person and I love everyone and I’m accepting of everyone.”

Gemma told Buzzfeed that although she thought the memes were funny, none of them were true. And as the women began responding to comments, questions and jokes to clarify their inclusive and loving worldviews, she thinks “people realized that not all white girls who love fall fashion and pumpkin spice are what we’re all categorized to look like.”

One of the main issues the women experienced was being stereotyped by users on Twitter as homophobic, transphobic and otherwise anti-LGBTQ. However, as both women embraced the meme, and Covington publicly confirmed she supports LGBTQ communities, the joke has become more wholesome. In fact, Covington utilized her platform at the time to share a GoFundMe page made by the creator of the meme, who happened to be a trans person in need of gender-affirming health care. Covington even donated $500 to the fund herself, shocking some Twitter users, and offering a final confirmation that their negative assumptions were wrong.

The trend did not stop there. Because of the positive turn offered by the women’s open and honest response, “Christian Girl Autumn” has become a seasonal internet meme, returning every year around August.

The New York Times recently interviewed Covington about Christian Girl Autumn, giving readers an update on the blogger’s life since she rose to popularity because of the meme. She reported she still makes an extravagant effort to produce beautiful, clean-cut autumnal photos, and although she sometimes struggles with Instagram’s changing algorithm, her followers are still supportive. She is even named the “Mother of Autumn” by some of her fans who say she is to fall what Mariah Carey is to Christmas — an icon of the season.

Along with making regular appearances on Instagram to display everything from autumnal fashion to her life as a mom, Covington also has a blog, Southern Curls and Pearls, where she posts three times per week. Fans also keep up with Gemma and her latest life updates on her blog, The Sweetest Thing.

So, as Christian girls everywhere break out their autumnal clothes, we can reflect on the unexpected inclusivity and kindness of two women who were willing to laugh at themselves and use their platforms to love others (with a pumpkin spice latte in hand).