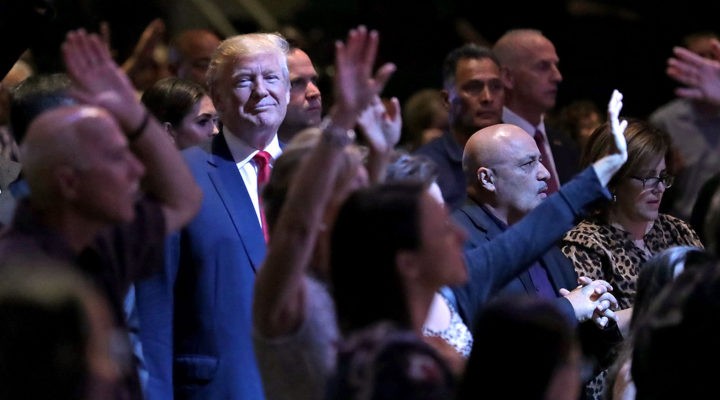 Few historical events have captured the attention of Americans, if not the world, more than the election of Donald Trump to the presidency of the United States in 2016 and the dizzying, polarizing and, to some, maddening four years of his time in office.

That Trump defeated Hillary Clinton remains one of the greatest upsets in presidential history. That he somehow captured the support of the evangelical church community, in spite of his scandalous past, his pathological lying, his blatant bullying of anyone who disagrees with him, his misogynistic and narcissistic behavior, is equally stunning. Franklin Graham, son of the late Billy Graham and one of Trump’s most trusted religious advisors, said, “God’s hand intervened,” to describe Trump’s presidential victory. Former Trump press secretary Sarah Huckabee Sanders said “God wanted Trump to become president.” Time magazine correspondent Samuel Perry, writing about Trump’s visit to First Baptist Church of Dallas on Dec. 19, 2021, noted that the crowd gathered there chanting, “We love you, we love you,” wasn’t chanting to Jesus. They were chanting to their savior.

One of the fundamental tenets of evangelical Christianity is found in Romans 3:23: “For all have sinned and fall short of the glory of God.” The antidote to this condition is to confess one’s sin before God, ask for forgiveness and accept Christ as Savior, which is commonly referred to as the “sinner’s prayer” in evangelical circles.

Yet when Donald Trump, in an interview with CNN in 2015, was asked if he had ever asked God for forgiveness for his actions, replied: “I’m not sure I have. I just go on and try to do a better job from there. … I think if I do something wrong … I just try and make it right. I don’t bring God into that picture. I don’t.”

So how did this unrepentant serial sinner become divine in the evangelical movement? The answer lies in two arguments: The desire of Christian evangelicals to have proximity to power, and how historical events become imbued with theological meaning.

In, The Power Worshippers, Katherine Stewart argues that while many Americans still believe the Christian right is a religious movement, primarily concerned with “values,” leaders of the movement know it’s really a political movement focused on money and power, the fusion of which supplies its foundation. Willie Sutton, when asked why he robbed banks, famously replied, “because that’s where the money is.” Trump and his movement have money and power in spades.

“Willie Sutton, when asked why he robbed banks, famously replied, ‘because that’s where the money is.’ Trump and his movement have money and power in spades.”

And what is the goal of this political movement? To dominate every aspect of life in America, from government to education to the economy, in accordance with their religious principles. Their autocratic savior isn’t concerned with upholding values. No, Donald Trump’s primary role is to impose the will of this tribe on the entire nation, not by the rule of law, but by the force of law.

The desire to be close to power is one explanation of the evangelical embrace and worship of Trump. How certain events become imbued with theological meanings is another.

In The Meaning of Revelation, Richard Niebuhr explains how a fact — for example, Trump was elected president — becomes a theological statement or religious belief. Niebuhr distinguishes between history as lived and as seen. The former, he says, is construed from the perspective of a participant, the latter from the vantage point of an observer:

Revelation cannot mean history — if it also means God. What we see from the historical point of view and what we believe as we occupy that standpoint must be two different things. For surely what is seen in history is not a universal, absolute, independent source and goal of existence but particularity, finiteness, opinions that pass, caprice, arbitrariness, accident, brutality.

That Donald Trump was elected the 45th president of the U.S. is an indisputable, historical fact. That he was chosen by God to become president, however, is a theological interpretation of that event, entirely subjective and speculative. It isn’t a universally verifiable or absolute truth. Just because these claims are made by evangelicals whose motives are suspect doesn’t mean they are metaphysically or existentially accurate. They are matters of faith, like the belief that Jesus is the Son of God.

Speaking of whom, many Christians have waited more than 2,000 years for Christ’s return. For those who see Trump as divine, they may not have to wait another 2,000 years for his second advent. The next presidential election is in 2024.

David B. Ramsey is an author and former Baptist minister.  He holds degrees from Wake Forest University and Duke University, and he was named a Fellow in Religion and Leadership Development at Princeton Theological Seminary. His sermons appeared frequently in national clergy journals and religious publications, and he has served on numerous civic and religious boards. His author’s website is dbramsey.com

Donald Trump Jr. tells young conservatives that following Jesus’ command to ‘turn the other cheek’ has ‘gotten us nothing’