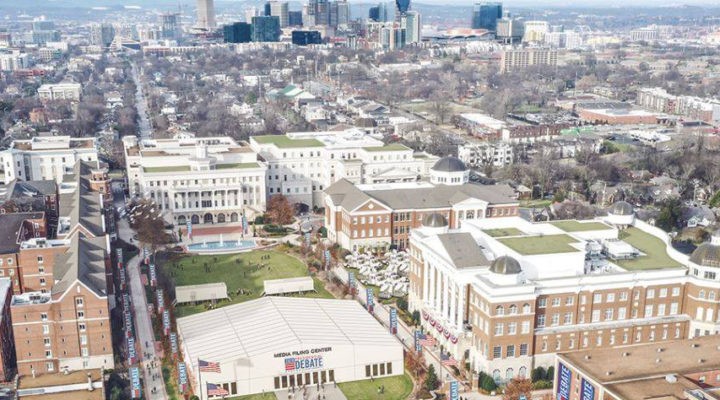 i
Belmont University campus with downtown Nashville in the background.

i
Belmont University campus with downtown Nashville in the background.

Gregory Jones, a Methodist minister and dean of Duke Divinity School, has been named president of Belmont University, effective June 1. He will succeed long-time president Bob Fisher, who will retire in May.

Under Fisher’s leadership, Belmont experienced rapid growth in every measurable way and gained national prominence, especially for its connections to the Nashville music industry and its innovation in the music business degree, including a nationally televised Christmas program. The university also hosted one of the 2020 U.S. presidential debates.

Over the two decades of Fisher’s leadership, enrollment grew from 2,976 students to more than 8,200. The university now bills itself as “the country’s largest ecumenical Christian university.” In 2005, Belmont broke away from the Tennessee Baptist Convention and created a self-perpetuating, independent board of trustees.

The university has opened new graduate schools with Colleges of Pharmacy and Law, and a College of Medicine is being formed. The physical campus in Nashville also has expanded dramatically in recent years, leading Fisher to be known as “Bob the Builder.”

Thus, university trustee chair Marty Dickens said finding a president to follow Fisher “is no easy task.” He praised Jones as the perfect fit, saying he is “an exceptional scholar, tremendous communicator and strategic thinker.”

Further, “as a devoted Christian and ordained minister, Dr. Jones will ensure Belmont’s ecumenical Christian identity endures and is strengthened in the years to come,” he said. Jones was unanimously recommended for the position by a search committee, which included representatives from trustees, faculty, staff and alumni.

Jones twice has served as dean of Duke Divinity School, first from 1997 to 2010 and then again from 2018 to the present. Between 2010 and 2018, he was vice president and vice provost for global strategy at Duke University and later provost and executive vice president of Baylor University.

“I am honored, humbled and delighted to be invited to serve as president of Belmont University,” Jones said. “I have long admired Belmont as a university that brings together the best of Christian faith, an entrepreneurial spirit and a strong focus on forming and educating students through excellent faculty and staff. President Bob Fisher has provided extraordinary leadership over the past two decades, and I look forward to working with the Belmont community to build on all that has been accomplished as we look forward to a bold and exciting future.”

Jones’ accomplishments at Duke include raising $102 million in The Campaign for Duke and launching new initiatives including the Center for Reconciliation, the Thriving Rural Communities Program, the Duke Youth Academy for Christian Formation, the Clergy Health Initiative, the Reynolds Program in Church Leadership and other international partnerships.

Jones is the author or editor of 19 books, including the recently released Navigating the Future: Traditioned Innovation for Wilder Seas, which outlines his perspective on traditioned innovation as “a habit of being and living that cultivates a certain kind of moral imagination shaped by storytelling and expressed in creative, transformational action.”

He is an ordained United Methodist minister who earned a bachelor’s degree in speech communication and a master’s degree in public administration from the University of Denver, as well as a master of divinity and Ph.D. in theology from Duke University.

He is married to Susan Pendleton Jones, who has served as a campus minister, a local church pastor and as a senior administrator at Duke Divinity School. Currently, she is working as a consultant to the bishop’s office of the United Methodist Church in North Carolina.