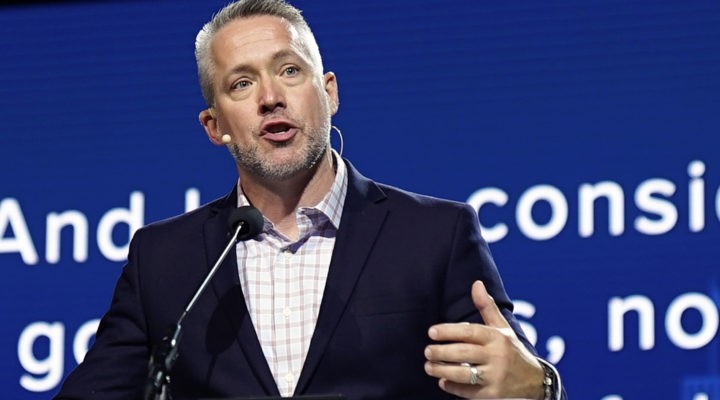 In his last address as president of the Southern Baptist Convention, J.D. Greear urged leaders and members of the denomination to support sexual abuse victims, stand with people of color in their struggle against racism and to stop equating politics with spiritual truth or face losing the opportunity to effectively share the gospel with the nation and world.

Speaking June 15 before 15,000 messengers gathered at the SBC annual meeting in Nashville, Tenn., the North Carolina pastor doubled down on the convention’s dedication to the Baptist Faith and Message doctrinal statement, the inerrancy of Scripture, the ideology of complementarianism and an opposition to Critical Race Theory.

“When Baptists evangelize the lost, we work together. When we stop, we fight.”

But he devoted the majority of his fast-paced sermon to urging, demanding and seemingly even begging Southern Baptists to avoid falling prey to legalism as they necessarily and uncompromisingly affirm central doctrines. Failure to keep Christ first could undo the SBC’s victory over liberalism in the late 20th century, foster more in-fighting and frighten off those outside the already declining denomination, he said.

“You see, Jesus warned that there is more than one way for a generation to lose the gospel,” he said of the pharisaic legalism that has led to gossip, character assassination political litmus tests for churches and pastors.

“When Baptists evangelize the lost, we work together. When we stop, we fight,” Greear said, adding that when Southern Baptists focus on internal divisions and external politics, they are like fighting dogs “with access to Twitter.”

Another danger of legalism is its preoccupation with outward appearances, including failures to adequately respond to reports of sexual abuse, he said. “It happens when we care more about our reputation than the victims’ safety or when we defer to protection of the institution rather than the protection of the vulnerable for whom Jesus died.”

Greear said his travels to SBC churches revealed to him a rank-and-file base dedicated to evangelism and church planting but also “repulsed by sex abuse and cover up to protect reputation.”

While on the one hand repudiating the tactics of the right-most wing of the SBC, he also appealed to their concern about Critical Race Theory, which has become a flashpoint of controversy in the nation and denomination. Opposition to this academic structure of understanding systemic racism has been a key objective of a new group called the Conservative Baptist Network.

“The vast majority of Southern Baptists recognize that CRT arises out of a worldview at odds with the gospel.”

“The vast majority of Southern Baptists recognize that CRT arises out of a worldview at odds with the gospel,” Greear said, echoing the view of the six SBC seminary presidents but a view concerning to many Black SBC pastors.

While opposing Critical Race Theory, Greear called on white Southern Baptists to “stand with their brothers and sisters of color as they strive for justice.”

He also implored Black and Hispanic pastors not to give up on the denomination as it works through its struggles.

“To our leaders of color, many of you are struggling to stay in a convention you think cares little about you: we need you,” Greear said to a standing ovation. “There is no way we can reach our nation without you.”

Earlier in the day, convention messengers had been told that most of the growth in the convention — which is otherwise numerically declining — has come through non-white members and through multi-ethnic congregations.

Greear also lamented the reputation the SBC has gained as a political organization.

It’s never good when that happens, he explained. “Anytime the church gets in bed with politics, the church gets pregnant, and the offspring does not look like our Father in heaven.”

Avoiding political entanglements does not equate to being soft on central biblical and moral values or being ambiguous on marriage, pro-life and gender issues, he added.

But Greear said he has been negatively surprised by the loud voices that seek to divide Southern Baptists and transform the convention into “a cultural affinity bloc and a political voting bloc” rather than focusing on the gospel and keeping “the main thing the main thing.”

Greear said he’s been accused on social media of “having Nancy Pelosi on speed dial” and of traveling on a corporate jet owned by the Cooperative Program. He also shared that a fake Twitter account was created in the name of a Black pastor’s wife and used to claim support for women’s ordination among African Americans.

“What does it say about us when we allow this to go on?” he said.

“The exaggeration and lies many of our entity leaders have had to respond to, it makes us smell like death even when our theology is squeaky clean. I hear from Latinos and African Americans wondering why they would want be part of this fellowship.”

It has to stop, he said. “We are great commission Baptists. We have political leanings. But we are not the party of the elephant or the donkey. We are the people of the lamb.”