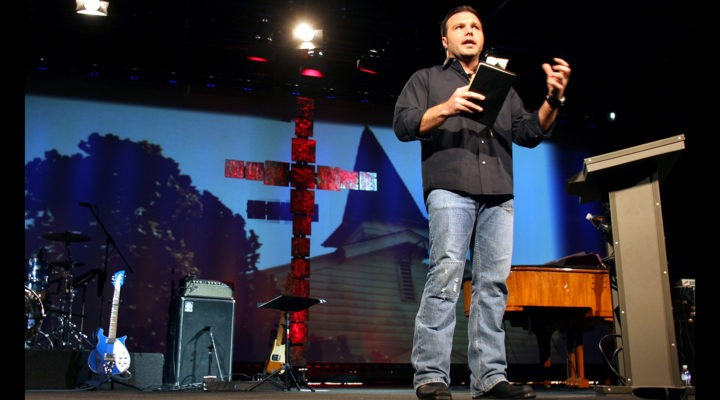 Searching for redemption in ‘The Rise and Fall of Mars Hill’

I (Maina) still remember being a newlywed when my wife and I attended a church service in the Maryland area. A young hipster speaker who was filling in for the pastor that day began speaking in a fiery tone, which wasn’t unusual for me to encounter having grown up in a Baptist church. But the speaker mixed his rhetoric with crude behavior. He also kept talking about a pastor named Mark Driscoll. To be honest, it was the first time I had heard the name Mark Driscoll.

After the message, I went home and looked up everything I could find about Driscoll. I was captivated yet also alarmed by what I was reading. During the early to mid 2000s, Driscoll and his influence couldn’t be missed. So, when “The Rise and Fall of Mars Hill” appeared on my podcast radar, I like many people, wanted to know what brought down this very large influencer in ministry. Now to be completely honest, Christianity Today has a soft place in my heart. It was the place that gave me my start. In fact, the editor who is overseeing my new book was a Christianity Today editor and has been very influential in my life. However, after listening to the quality and in-depth interviews of the podcast, I did walk away concerned about the path of religious news journalism, as well as having a concern for the local church, which I love and have given my life to serving.

We want to make sure we address what life in the local church should look like after “The Rise and Fall of Mars Hill,” while making sure we address how Mark Driscoll should be treated and cared for. Yes, we believe even Mark should be cared for. We serve a God who values all people, and the grace of Jesus is what defines us as people of faith.

Listening to the stories of survivors and victims from the podcast, those who find themselves in the “pile of bodies behind the Mars Hill bus,” my (Jeremy) pastoral heart breaks. I think about what I would do if these were my people. How would I help them process their hurt, how would I care for their woundedness, and how would I guide them back toward faith and wholeness?

We must listen. I am grateful for the stories shared on the Christianity Today podcast, but I worry about the posture from which they were collected and produced. Something I have learned over the past few years since my congregation transitioned to being LGBTQ affirming is that the stories of the wounded are sacred and it is a sacred act to receive them. The stories of hurting people must be treated, like the people themselves, as an end and never as a means to an end.  We must receive such gifts with humility and care, responding with love and, when appropriate, sincere confession of complicity.

Yet I worry that the stories in the Christianity Today podcast are used for shock value. The stories themselves should stand on their own, received as truth and allowed to compel us to confess our complicity in celebrity pastor worship, of valuing congregational prestige over congregational health and allowing worldly values to govern our churches.

“One of the greatest gifts our churches can offer to the wounded, especially those wounded by the church, is to hold space for them to share their stories and to be completely heard.”

One of the greatest gifts our churches can offer to the wounded, especially those wounded by the church, is to hold space for them to share their stories and to be completely heard — without commentary, excuse or correction. In humble listening, we engage in reconciliation and allow space for healing. These stories cannot be used for our benefit or agenda; they must simply be allowed to exist as holy truth and us in their presence.

Jesus knows something about being in the presence of hurt and chaos, while at the same time addressing the needs of the person and the theological concerns of the situation. For example, in the story of the woman at the well, Jesus goes out of his way to get her to address her need for him. When Jesus confronts the woman at the well, he doesn’t skirt around the issue in addressing her; in fact, he approaches her in the afternoon knowing she would be there alone because of her shame.

As we think about Mark Driscoll, we can’t help but think what Jesus would say to him and the broader body of Christ has a whole. We believe Jesus would approach him based on how he hurt and abused the people he was called to lead, while also turning his attention to the broader body of Christ, addressing our desire for celebrity preachers with large churches rather than true servant leaders. Because Jesus cares, we think he would offer a time of challenge mixed with a time of repentance. In other words, he would provide a way out.

Our hope is that the Christianity Today podcast will be used in that way, and that as Christians, we will remember the words of Jesus: “Go and sin no more!” Our hope is that the church should not long for fame or be prone to tolerate abusive behavior. It’s sad that we needed a podcast to hold up the mirror to ourselves, especially when the evidence has been right in front of us.

Our prayer is that this will be a holy moment in our culture, with Driscoll repenting, and the church working to serve with humility, lead with the heart and mind of Christ, and allow the story of Jesus to meet each person in a way that brings healing, wholeness, joy and hope.

Jeremy Hall serves as associate pastor for faith development at Towne View Baptist Church in Kennesaw, Ga. He is a doctor of ministry Candidate at McAfee School of Theology and co-host of the Kingdom Ethics podcast with David Gushee. Maina Mwaura is a freelance writer and communications consultant who lives in the metro Atlanta area. A native of Orlando, Fla., he earned a bachelor of science degree in communications from Liberty University and a master of divinity degree from New Orleans Baptist Theological Seminary.