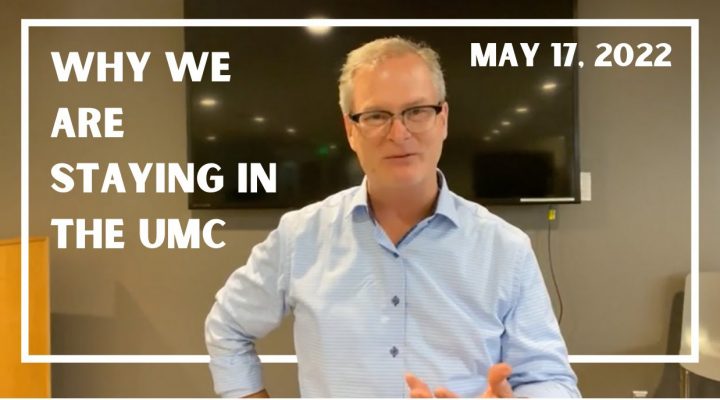 United Methodists do not face a “binary choice,” the pastor of the denomination’s largest church in America told his congregation last spring, foreshadowing the schism that has since become full-blown.

A video of Adam Hamilton, pastor of Church of the Resurrection in suburban Kansas City, speaking with his congregation about the future of the denomination has begun circulating once again as hundreds of churches are leaving The United Methodist Church to join the new Global Methodist Church.

While those who advocate leaving the UMC often portray the debate as an all-or-nothing mandate on LGBTQ issues, it’s not that simple, Hamilton said.

“I don’t think this is this binary choice.”

For 200 years, United Methodists have been a “big tent” denomination seeking to bring people together despite different views on key social and political issues, he said.

“The United Methodist Church … probably from our beginning, we have been a church that struggled to hold everything together,” he explained. “Some people talked about us as a big tent. Some people don’t like that language, but we are a church that, at least from the 1800s on, and maybe in the 1700s as well, was a church that held together in tension.”

But today, those seeking to start a new Methodist denomination portray those staying in the UMC — which is the vast majority of American UMC churches — as being unfaithful to the Bible, he lamented.

“Most of the folks who are encouraging people to want to leave don’t want to talk about it being about homosexuality, because that feels not very nice.”

“Most of the folks who are encouraging people to want to leave don’t want to talk about it being about homosexuality, because that feels not very nice,” Hamilton asserted. “It doesn’t feel kind or compassionate. So we’re not really going to talk about this as really about how we read Scripture when it comes to homosexuality. It’s about whether we hold the orthodox doctrines of the Christian faith, or whether we hold, you know, Scripture has authority in our lives or something else.”

That’s offensive, he said, noting he and other pastors like him remain orthodox Christians. “If the United Methodist Church was wanting to give up orthodox Christianity, I’d go find another denomination myself.”

Many of the conservative pastors who want to lead their churches out of the UMC also don’t want to speak plainly about sexuality with their own congregations because of fear of inevitable division, he asserted. “They don’t want to have the vote in their local church because they know they’re going to be divided. And there are people who will leave their church who have gay kids or gay friends or who see this issue differently.”

“They don’t want to have the vote in their local church because they know they’re going to be divided.”

“What I’m passionate about … is I look forward to the day when the United Methodist Church is no longer fighting about this, but we’ve removed the language from the (Book of) Discipline and we’re focused on the mission and ministry of the church. And I have great hope for the United Methodist Church in the future because I think we have the right message for this generation.”

Hamilton said his hope is that language forbidding Methodist clergy from officiating same-sex weddings would be removed from denominational policy. And when that happens, it would not mean more conservative pastors or congregations would be forced to participate in same-sex weddings, he added.

“I just want to be clear: If you stay United Methodist, you are not being bound to do anything except love and welcome people and then you are going to wrestle with, or your pastor will wrestle with, who are we going to marry and what are our wedding policies going to look like?”

There is no intent to force conservative UMC churches and pastors to embrace same-sex marriage, Hamilton said. What the more progressive side of the denomination — which is a majority among American UMC congregations — wants is simply to let pastors and congregations decide what they will do.

Labels like “liberal” and “conservative” are not helpful, he declared.

“To be liberal means to be generous of spirit. It means to be open minded. It means to be, you know, somebody who is constantly reforming and … seeing things in different ways. To be conservative means there are certain things that should be conserved and held fast, and you don’t just give them up because they’re no longer in vogue in style. And, and what we find in the United Methodist Church of today, and at least since I joined the church in 1983, is you’ve got people who are, um, very focused on the social gospel and on, you know, social action and justice.

Although recorded May 17, 2022, the video of Hamilton’s speech to his congregation has found renewed interest as the debate about staying in or leaving the UMC has come down to congregation-by-congregation votes. The video has been viewed 75,000 times and has accumulated 460 comments — many posted within the last few weeks.

United Methodists on alert for dissidents ‘poaching’ members and pastors

‘Everybody’s doing it’: United Methodists ignoring their own rules as break-up continues | Opinion by Cynthia Astle