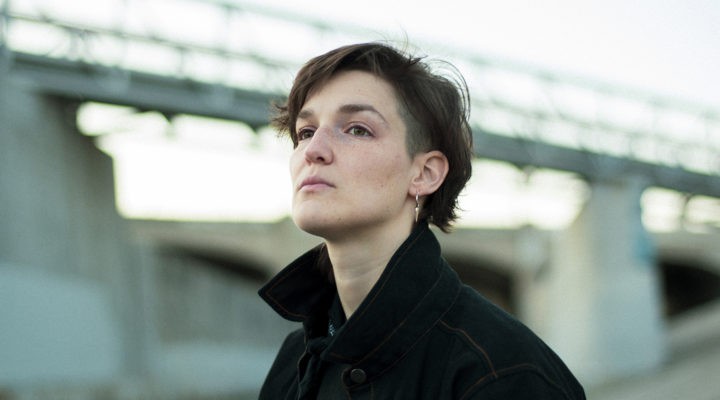 How did an openly queer artist climb to No. 1 on the Christian music charts?

The openly queer Christian artist Semler was elated to report the breaking news that the parking attendant at a Switchfoot concert supports gay rights. And that wouldn’t be the only surprise of the night.

As they drove to their parking space, Semler joked about how huge this news was and wondered if the affirmation they received in the parking lot might also come from the stage.

Later that evening, their plan was: “Sometime maybe after ‘Dare You to Move’ is played, I’m gonna yell ‘gay rights’ and kind of see what their crowd does.”

The next day, Switchfoot’s lead singer, Jon Foreman, replied, saying: “Yes, I support your rights and freedoms. I want you to feel loved and supported. In fact, it breaks my heart to think that you would not be accepted.”

Semler followed up on Foreman’s statement with, “I am interpreting what you said as being affirming. If I am incorrect in that, then I really hope you would clarify because I think for many queer people of faith, the bait and switch of hearing such encouraging words like yours and then finding out that it means something else, it can be heartbreaking. But I don’t think that’s you.” Earlier this year, Semler became the first openly queer artist to climb to the No. 1 album on the Christian music charts. While their explicit album The Preacher’s Kid is not something you’d typically see anywhere on a Christian music chart, Semler was able to get the word out via social media.

In an interview with Baptist News Global, Semler explained: “I just wanted the project to find the people who needed to hear it. I knew we were out there, and I knew we had a lot to talk about.”

While many are focusing on Switchfoot’s statement or on Semler’s unexpected rise up the Christian charts, the bigger story is how queer artists like Semler can offer the church an opportunity for awareness, healing and empathy that is desperately lacking in the church today.

Growing up gay in the body of Christ

Semler’s dad is an Episcopal priest. And while their church stayed away from preaching against LGBTQ people, Semler still had to grapple with the larger culture of evangelicalism that is largely unaffirming and quite hostile: “Much of my younger years were spent grappling with shame and secrecy that was never meant to be mine.”

But deeper than the wounds that many LGBTQ teenagers have to bear, Semler also held to dreams carried since childhood: “I knew who I was when I was 4 or 5 years old on the playground. I dreamt of a beautiful life with a wife and some pets and a haircut like Leonardo DiCaprio in ‘Titanic.’”

While many unaffirming gay evangelical celebrities tend to talk about their sexuality as a burden, a thorn in their flesh, or as something to be overcome, Semler approaches their sexuality with gratitude. In the song “Thank God for That,” they sing, “But have no fear and have some hope, for the one who made you loves you the most. Every bone in you is a heavenly host. Praise the Father, Son and the Holy Ghost.”

Semler’s connection with their childhood dreams led to a gratitude for the dreams of others as well.

“We all hide parts of ourselves that we fear others won’t accept. We all strive to belong.”

“I believe very much that we are all image bearers,” Semler affirmed. “We all hide parts of ourselves that we fear others won’t accept. We all strive to belong. My playground dreams might look different than yours did, but they’re both true and we’re both beloved.”

Sending songs back through time

Prior to releasing The Preacher’s Kid, Semler released a series of singles and EPs going back to 2017. And traces of connections between one’s inner child and the inner child of others are found throughout those projects.

In their earliest EP, Of the Things that Matter, they sing, “Don’t grow up too fast. It’s better if you find someone who makes you laugh like you did when you were a kid.” Semler’s songs are laced with love to the inner child. Whether quoting a line from a lullaby or recollecting a common memory held dear, Semler carries a profound sense of self and neighbor awareness.

The singer described this artist/child connection by saying, “I think a lot of what we do as artists is just inner child work that we share with the world … . I started writing music as a coping mechanism. If I could set what I was experiencing to music, then somehow it didn’t hurt as much. Now that I’ve processed more, I can write from a place of peace and security. Sometimes it feels like I’m sending songs back through time.”

Asking a lot of questions

Awareness of childhood dreams within the wounds of everyday life opens us to curiosities and questions that often can be difficult to wrestle through. For LGBTQ people in Christian communities, the questions begin within oneself.

“As I got older, it became clear to me that this daydream wasn’t acceptable and I should try to change,” Semler remembered. “By the grace of God, I pulled all my courage together and finally came out as myself. Coming out brought me closer to my Creator and fostered a divine curiosity I’d never experienced before.”

Eventually, those inner curiosities spill over into questions that can be scary to ask in public. But thankfully at home, Semler found these questions were welcome.

“Growing up in a rectory conditioned me to sort of ‘kick the tires’ and ‘peak behind the curtain’ of faith from an early age. My Dad worked for God? It’s a strange thing to conceptualize as a kid. My Dad did a great job of entertaining my questions and theories. He was also never too proud to tell me if he didn’t know the answer to something. I think my curiosity about faith has only grown with time.”

Thus, in the song “Bethlehem,” Semler sings, “I’m gonna ask a lot of questions because I’m giving this my all.”

Some of Semler’s questions can be humorous. For example, in the song “Youth Group,” the artist questions the idea of youth group lock-ins: “Youth group lock-ins are a really strange concept that youth group leaders seem to really like. It’s like, ‘Let’s take some repressed, hormonal teenagers and put ’em in a church and hope they find Jesus overnight.’”

Other questions Semler poses for the church carry within them very deep hurt, as illustrated by this line also from “Bethlehem”: “You know the people preaching now, well they’ve been putting us through shit. And if you don’t sanction that, then why are you rewarding it?”

The disconnection between the institution of the church and a relationship with God and others is something Semler has wrestled with since childhood: “I think it’s a bit similar to how I grew up in a rectory and naturally found myself questioning the role of religious institutions. I was born into a system that was never built to include someone like me. And yet God was still by my side. The juxtaposition of those two truths encouraged me to question that system. I think this is often the case for LGBTQ+ people of faith — especially young people.

“I was born into a system that was never built to include someone like me. And yet God was still by my side.”

“I wrote Bethlehem during a time of uncertainty and frustration. I’d been on the receiving end of some polite Christian cruelty, and I just wanted some peace. I was desiring God while deconstructing religious institutions and gatekeepers.”

Unfortunately, the disconnection that happens between many LGBTQ Christians and institutional churches often leads to ruptures in relationships between the closest of friends. In one of the most heartbreaking lines from “Jesus from Texas,” Semler sings, “My best friend found God, so we lost touch. I guess a Savior beats a friend who thinks you’re good enough.”

“There’s a quote from Rev. Jacqui Lewis that I think about a lot which is, ‘We only know God because we know each other,’” Semler said. “Sometimes I think we frame God as an entity outside of our lives or only found within certain church walls or highly curated social circles. God is so much greater than our boundaries. It’s not for me to say who is whole or not. But I don’t believe that two best friends with broken hearts was God’s will.”

For Semler, no matter how deeply our wounds cut, the deeper truth of a childlike love can be found. In Don’t Grow Up Too Fast, they sing, “Don’t be afraid of shadow times. See the grapes through the vines.”

One way that Semler’s hope stands out is that it also extends to others, including those who cause the wounds.

In “A Good Man,” they lament the dying of the good man inside the one who hurts others: “You poisoned the well of someone you called a friend. I think you’d rather they hate you, but I don’t think they do. They’re just sad you keep killing the good man in you.”

“You’re not what they say about you. And a loser in a button-up can’t send you to hell.”

And then this haunting question: “What have you become? You were your mother’s son.”

The artist’s care for others also reaches the “repressed, hormonal teenager” mentioned in the song “Youth Group.” Singing about an overnight youth rally, Semler says to that anonymous teen: “I hope you’re doing well. Be kind to yourself. Take care of that kid. You’re not what they say about you. And a loser in a button-up can’t send you to hell.”

And here is the heart of the ministry in the music, as Semler explains in the interview: “I want to be someone my loved ones can call on for support and care. I also want to be available and useful for causes greater than my own worries. But on the micro-level, anyone who has left my life knows they can call me. Next week or next decade, doesn’t matter.”