I grew up so terrified of God’s wrath that I drove through a stoplight while staring at my speedometer, afraid I’d lose my salvation for breaking God’s law in Romans 13 by going 36 mph in a 35-mph zone.

When my grandfather died, I was convinced he was burning in hell and that it was mostly my fault for not witnessing enough. But then I was introduced to John MacArthur, John Piper, Mark Dever and Matt Chandler and learned about their Calvinist theology that told me I could be confident in my salvation because the Father’s wrath was satisfied against Jesus on the cross for me, and that God chooses who gets saved apart from our will or effort. This theology numbed my pain.

And for the next 15 years, these men became my heroes as I led worship and preached within their world. In May 2020, Netflix released a documentary called American Gospel: Christ Alone, which is a conservative evangelical Calvinist’s dream world of John MacArthur, John Piper, Mark Dever, Matt Chandler and others.

American Gospel criticizes what these high-profile pastors consider to be the false gospels of moralism and the health-and-wealth gospel through their Calvinistic Reformed lens of penal substitutionary atonement. The Gospel Coalition hails the film as “a thrill to see.”

I strongly agree with their intention to dismantle the ministries that manipulate people for money. John Piper is correct in calling it a “crap gospel.” And there are even moments when I found myself agreeing with MacArthur’s henchman Phil Johnson. If the gospel is “good news to the poor … to let the oppressed go free,” then those who oppress the poor need to be exposed.

However, while I agree with their intention to expose the oppressors, I ultimately found their solution to be small minded and abusive. Here are six reasons why:

First, American Gospel has a small-minded, abusive view of authority.

Out of 45 cast members, 42 are men. The documentary contains about 394 clips of conservative men talking, compared to about 47 clips of women talking. While the men are primarily included for instruction, the women mostly share emotional stories of their very real suffering and how deceived, depressed and vocationally dumb they were before they started listening to and agreeing with the conservative men.

American Gospel’s severely limited cast diminishes their ability to see and share the gospel, and enables a patriarchal power structure. These are the same men who argue that women should not be police officers or managers at work, that women are to be associated with word games and told to “go home,” that “if women are in charge, we’re in trouble” and that women who try to be in charge can “sit there with all your jewelry and junk” after being “conquered because you overpowered your protector.” 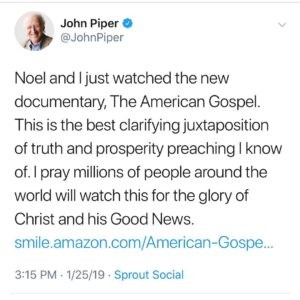 It’s no wonder they featured so few women sharing their perspectives in this documentary. Why can’t we unleash and learn from the women of our world for the humans they are?

Second, American Gospel has a small-minded, abusive view of other religions.

Because they view the gospel as penal substitutionary atonement, these pastors falsely categorize all other religions as people trying to earn their way to heaven. Paul Washer says, “In other religions, you get to heaven by being good, by earning it.” Jackie Hill Perry says, “The person will believe they can attain it, be the Pharisee … or be the Mormon,” then laughing, “or the Muslim, or the Jehovah’s Witness. All of them! You’ll try to earn salvation by trying to be a good person.”

This laughing dismissal of “all of them” refuses to see and love our neighbors.

I have learned much from Buddhists about being mindful and present, about seeing beauty in the whole. Even within Buddhism, there are many nuances to explore. To reduce Buddhism down to a penal substitutionary lens of trying to earn heaven after death by good works completely misses the beauty that Buddhists bring to our world and categorizes them as something to be feared. It also assumes that other religions even care about going to heaven after they die.

Why can’t we develop relationships with “all of them,” appreciate their beauty and consider with them how we can be more present in grace?

Third, American Gospel has a small-minded, abusive view of sin and justice.

It’s difficult to explore presence in grace with others when you’re convinced they’ve broken the law and are about to be set on fire forever by God. While the documentary acknowledges the idea of original sin where we are all condemned simply for being human, it mostly focuses on individual-based law breaking.

Ray Comfort does his classic Ten Commandments interview where he corners strangers into admitting they are lawbreakers. He says, “Good in God’s book means morally perfect.” So anyone who isn’t morally perfect is led to believe they deserve to be set on fire forever. Paul Washer says, “We owed a debt to God because of our sin. And that debt was eternal punishment.” Exploring the depths of who we are as a relationship ourselves and in relationship with others is a fascinating journey of learning to love our neighbors as we love ourselves. Yet, Steve Kozar ignores that and boils it down to this: “That is the reason why many people will refuse to become a Christian. They don’t want to repent. They don’t want to give up their sin. They like sinning.”

This simplistic, individual lawbreaking view of sin ignores the very real communal sins that America has committed. Not once do these faith leaders mention slavery, mass incarceration or Christian nationalism. Only three of the 42 men interviewed are Black. Of the approximately 394 video clips from men, only seven are from these three Black men.

This group’s theological clique is so small that they aren’t including those on the margins. They seemingly aren’t even aware of how their retributive, punitive theology has shaped the American gospel for centuries and created our culture that views justice as inflicting pain rather than restoring shalom.

Why can’t we embrace neuroscience to plunge the depths of our failure to love ourselves and our neighbors, and pursue a restorative view of justice?

Michael Durham says, “My problem of sin goes far beyond my actions. It goes to who I am as a person. I have a nature of sin. That is my essence. The gospel … addresses who I am by promising to change me at the core basic level of personhood.”

Sean Demars says, “One of my favorite attributes of God is God’s patience. And it means God doesn’t give you what you immediately deserve. What you deserve right now at this very moment is to be killed and to be in hell for all of eternity and suffering his wrath because of the way you rebel against the God who made you.”

Really? Right now, my 2-year-old daughter doesn’t want to stay in her bed. These men really think she deserves to be ripped out of her room and thrown into an eternity of burning because of who she is at her core?

We are the result of 13.8 billion years of cosmic life, death and resurrection evolving from matter to consciousness. We haven’t fallen from perfection. We’ve been beautifully grown.

Why can’t we see humanity for the beautiful fruit of complexity, depth and union that we are?

Fifth, American Gospel has a small-minded, abusive view of suffering.

According to American Gospel, “God ordains and wills all … suffering, calamity and disease and death.” Steve Lawson says, “God was the one who said to Satan, ‘Have you considered my servant Job?”

Why would God cause our suffering? Lawson explains, “God has purposes in our suffering: to humble us, to conform us into the image of Christ, to wean us off of the world, to purify us, to help us identify with other people who are suffering.”

John Piper is also the guy who tells victims of child molestation that they need to see “God’s sovereignty … at the moment of causality” and that if they don’t, “You will now be left with no God to help you deal with this … . You have just shoved him off … and in your pain you shoved him so far to the edge of the universe that for the rest of your life you are crying out to a God to do miracles yet you have pushed him away… . And so you try to say there is no sense in which the sovereign God willed that, you will lose God for the rest of your life.” Throughout the documentary, we are told of a woman’s suffering that is totally heartbreaking. Due to her disease, she has to be fed directly into her intestines. She says, “Even though I don’t know all the answers … I’m not looking for answers … . I’m not angry with God anymore because I don’t think that he owes me anything. I feel like he’s given me a wonderful life. And I’m not even owed that.”

This woman is experiencing unimaginable suffering. Yet these men have led her to believe God has caused her pain to teach her some lessons.

Why does this woman need to have her pain numbed with theological formulas about penal transactions? Why can’t she fully enter into it, grieve and be healed?

Sixth, American Gospel has a small-minded, abusive view of the cosmos.

The French Jesuit mystic and scientist Teilhard de Chardin said Western Christianity “has assumed the appearance of a legal trial between God and his creatures.”

If we embrace modern science, we see that the universe is not made up of individual separated parts, but is a cosmic, organic whole. The universe at its core is energy in relationship, matter in becoming, consciousness being set free in greater complexity, depth and union.

Colossians 1:15-20 explores this cosmic becoming by setting all of creation in Christ. The true incarnation is an overflow of God that sets Christ not as a reactionary second Adam, but as the firstborn of all creation, as the head of the whole universal body.

American Gospel hits it apex with John MacArthur saying, “Every sin ever committed by every person who has ever lived will be punished. That is required by divine holiness and divine righteousness and divine justice. It will either be punished everlastingly in the life of the sinner or that punishment will be borne by Christ.”

The men of American Gospel: Christ Alone believe in a gospel that ignores 13.8 billion years of the cosmos becoming from and into Christ as its head and all in all. Instead, they break it all apart into individual penal transactions and pain infliction.

Is it any wonder that men with this individualistic penal view of the gospel would have such wrong views on authority, other religions, human identity, suffering and the entire cosmos?