About 75 people gathered July 8 outside a Missouri courthouse demanding answers and justice on the five-year anniversary of the disappearance and death of a woman married to a Missouri Baptist lobbyist.

Lynn Messer, wife of Kerry Messer, a conservative lobbyist with past clients including the Missouri Baptist Convention, disappeared suddenly from her rural home near Ste. Genevieve, Missouri, on July 8, 2014. Her skeletal remains were found more than two years later near an edge of the 250-acre family farm. 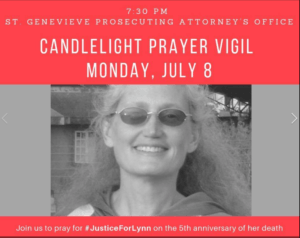 Her death certificate filed in July 2017 lists the cause of death as “undetermined at this time” and the investigation as pending. Sources quoting police say the case is still open, and her husband, who since remarried, has not been ruled out as a person of interest.

“The first thing I want to do is thank law enforcement for refusing to stop, for refusing to let go,” son Abram Messer told friends, family members and advocates gathered outside the Ste. Genevieve County Prosecuting Attorney’s Office in a candlelight vigil convened to, in his words, “cry out for justice.”

His brother, Aaron Messer, described their mother as “a Christian feminist,” despite living under demands of wifely submission that eventually destroyed his own marriage and could not have saved that of his parents.

“I remember times when Mom was off taking care of a lot of other people, and she wasn’t there with us,” he said. “It’s not like she abandoned us, but the reality was everyone was Mom’s family.”

Vigil organizers included Cheryl Summers, a leader in a June rally in Birmingham, Alabama, protesting widespread sexual abuse allegations in churches and institutions of the Southern Baptist Convention, and Carolyn Deevers, a St. Louis activist who began following Lynn Messer’s story because of similarity to other cases involving women in destructive marriages.

“Lynn’s disappearance and death raise many questions,” Deevers said in a timeline of the case read at Monday’s vigil. “How did Lynn die? How could a small woman with an injured toe and with hip replacements walk through pouring down rain in a thunder storm, in the dark of night, over muddy ground, and according to family members, have to avoid electric fences in the dark, and open and close multiple heavy gates to arrive at her destination?”

“Was it murder?” Deevers asked. “If so, was it premeditated? If it was murder, was her body moved or somehow concealed to keep search and rescue from finding her? Trained dogs should have found her scent; especially after a few days of her remains being in the hot and muggy summer elements. Tonight we pray for truth, answers, and justice. We pray they are on their way and right around the corner.”

A family friend recently started a GoFundMe campaign to help Abram Messer and his family purchase a home. Prior to his mother’s disappearance, Abram worked with his dad at the Missouri Family Network, described online as “a conservative, pro-family organization representing the traditional family institution in areas of public policy development by networking grassroots efforts.”

They became estranged after Kerry Messer began dating. Abram and his family had to leave their home, which they say his grandfather intended to leave to him, in June 2016. Aaron Messer moved off the family property in 2017, reportedly after his father told him that he was doubling his rent.

“Of the many wrongs my mother experienced — not recognizing the signs of abuse and not helping her is one of my biggest regrets,” Aaron said in August 2016. “Even now, looking back — conversations, parenting decisions, jokes such as ‘we don’t believe in divorce; murder yes, divorce no’ — they all take a new light.”

Kerry Messer testified in May before a state senate panel in favor of a bill that would prohibit the use of anonymous names such as John Doe or Jane Doe in lawsuits involving religious freedom.

“At issue behind this legislation are any number of activist organizations (that) have far-reaching agendas, so they are constantly shopping both for potential plaintiffs, as well as venues, to pursue their activist agenda,” Messer said, quoted by the News Tribune in Jefferson City, Missouri. “We’re talking about religious liberty, the bedrock foundation that made America great, here.”

“That’s nothing but a smear against the people of Missouri,” Missouri Baptist Convention representative Don Hinkle told the senate panel, “especially against people who support the First Amendment, and especially those who are people of faith.”