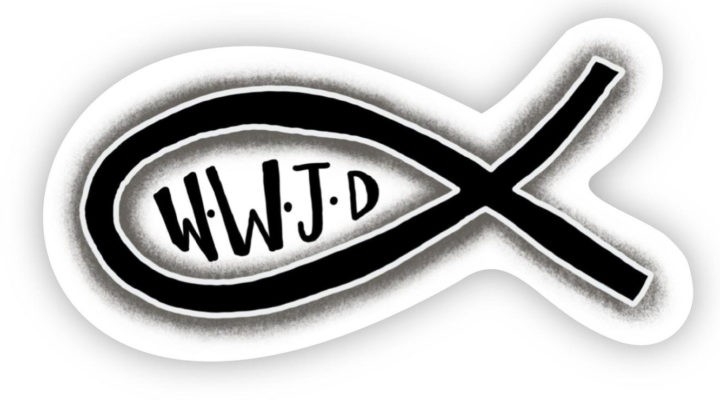 The foolishness of WWJD

Charles Spurgeon, a famous British preacher in the latter half of the 1800s, used the phrase, “What would Jesus do?” in a sermon. If you’ve ever read any of Spurgeon’s sermons, you know he had a knack for turning a memorable phrase. A few years later, the phrase found its way into a novel by Charles Sheldon called In His Steps: What Would Jesus Do? The purpose of Sheldon’s book was to inspire people to a higher moral standard of living.

One hundred years later, a Christian youth group in Michigan started a movement using the initials “WWJD,” representing the interrogative, “What Would Jesus Do?”

You know the rest of the story. The idea took off, and for the past 20 years, people still ask the question, “What would Jesus do?” How many WWJD items have you owned over the years?

To be honest, it doesn’t really matter how we answer the question. Once we do, we will be confronted with a task we can’t perform. For example, your child is seriously ill, and doctors are concerned she might not survive. What would Jesus do in that case? We know what Jesus would do in that situation because we know about the little girl he took by the hand and raised her from her deathbed (see Matthew 9:18-26).

If people are lined up waiting for food because of pandemic-induced lost jobs, what would Jesus do? Once again, we know what he would do. We saw it once (or twice in Matthew’s Gospel). He multiplied food and fed everyone.

I’m confident Jesus didn’t heal every sick child, and he didn’t end famines and feed every hungry person. What did he do then? I don’t know. We’re never told that he walked away from sick and hungry people.

You and I can’t raise dead people or multiply food. What do we do? I don’t have the authority to forgive a person’s sins, reveal their internal struggles, expose a hateful heart. These are the things Jesus did, and we can’t do any of it.

“Honestly, I don’t think Jesus would do any of those things.”

Honestly, I don’t think Jesus would do any of those things. I can’t see him ladling gravy on the turkey at a Thanksgiving meal, keeping a prayer list for the sick, putting in a few hours a week at the homeless shelter, or handing a beggar a few bucks.

Asking the question, “What would Jesus do?” does not provide any helpful information. It’s time to rethink. A better approach is to stop trying to do what we think Jesus might do and start being Jesus. Let me try to explain.

I have a great deal of respect for my father. I grew up wanting to be like him. This desire has continued my entire life. I often have said that my goal in life is to be half the man my father was, and that’s a lofty goal. I not only learned how to live from watching and listening to him, but I also inherited many of his characteristics. After all, he was my father.

Daddy was well known among Baptists in Colorado. When I returned to Colorado after graduating from seminary in Kentucky, whenever I visited a church, people would say, “You must be Bill Austin’s son.” In my world, that was the greatest compliment I could receive. As I got older, it became obvious there is a lot of my father in me. I don’t need to think about what Daddy would do consciously; many times, I just need to be myself.

“A better approach is to stop trying to do what we think Jesus might do and start being Jesus.”

In Galatians 2:20, Paul said, “I have been crucified with Christ; yet I live, no longer I, but Christ lives in me; insofar as I now live in the flesh, I live by faith in the Son of God who has loved me and given himself up for me.” Paul said it is not him living but Christ “in me.”

Paul didn’t have the opportunity to read the Gospel accounts of Jesus’ activities and actions. He talked with the apostles and heard the stories, but he was not in a better position to answer the WWJD question than us. Yet he understood something we seldom remember: “Christ lives in me.”

I’m not saying Paul’s description of a believer’s relationship with Christ is the same as mine with my father — every analogy breaks down at some point — but there is similarity. When a follower of Jesus enters a room, Jesus himself is there.

Jesus didn’t come to show us how to live. He came to live in us. We are his presence in today’s world. Jesus said, “I am the vine, you are the branches. Whoever remains in me and I in him will bear much fruit, because without me you can do nothing” (John 15:5).

“I don’t need to ask what Jesus would do. I just need to be Jesus.”

When Jesus did something, it seems everyone involved was uncomfortable. When learning that his friend Lazarus was nearing death, Jesus stalled for several days. When the adulterous woman was slammed down in front of him, he talked about sinners throwing stones at others, and everyone walked away stunned. When the crippled man was lowered through the ceiling, Jesus forgave the man’s sin. When Peter swung his sword to defend Jesus against the Roman soldier, Jesus healed the wounded man’s ear.

People were excited when Jesus came to town, but after he spoke and touched people, it seems many were left scratching their heads because they were caught off guard. It seems he challenged every norm, both religious and secular. He continually gave people more than they sought and asked them to give more than they could afford.

Next time you ask the question, “What would Jesus do?” if your answer doesn’t make you uncomfortable, then you probably have the wrong answer.

“If your answer doesn’t make you uncomfortable, then you probably have the wrong answer.”

Yet we pride ourselves on doing the things that allow us to remain in our comfort. For example, if we’re walking down the street and approached by a beggar, someone telling us they’re hungry and haven’t eaten in a while, our first reaction might be to say something like, “I’m sorry, I don’t have any money on me,” as we keep moving. We can always feel good by assuming they’re lazy and won’t work.

Then we stop and think, what would Jesus do? So, we stop and pull out a $5 bill, or if we want to give more than money, take them to the nearest restaurant and buy them a meal.

But think with me for a minute. If Jesus had your resources in that situation, what would he do? Would he give $5 or buy a meal for the hungry man? What if he lived in a house with a kitchen filled with food? What if he had thousands of dollars in the bank? What would he do? If he did something that made everyone uncomfortable, what would that be? What if you decided to be Jesus in that moment?

Certainly, I’m not going to pretend to know what you should do or even to presume to know what Jesus would do, but what are some things that would make us uncomfortable? Perhaps we could take the hungry man to the nearest Kroger and load him up with a week’s worth of groceries.

The one thing I know for sure is that Jesus always did the most loving thing. That’s what I mean when I say we need to be Jesus. Being Jesus means we love people. Don’t get sidetracked by trying to love everyone; love those in your world. You can’t love every person you see, but you can love more people than you are now.

If Jesus came to church today | Opinion by Jonathan Davis