The shock of being 60 years old

I turned 60 years old this past summer. I have not quite gotten over it yet.

Sixty is just different. It definitely feels at least three years older than 59. “They” say age is just a number. So maybe this is not about what the calendar says my age is. Maybe it is about what it feels like to be at this particular stage of life right now. I’d like to reflect on this a bit.

This is about my experience. Maybe it will connect with yours, although of course everyone’s story is different.

I’ll start with Planes, Trains and Automobiles, because why not. This great movie, about a nightmare business trip from New York to Chicago beginning on the Tuesday night before Thanksgiving, was released in 1987. My very pregnant wife, Jeanie, and I were 25 when it came out. We have duly watched it on the Tuesday night before Thanksgiving every year since. It’s how our holiday season starts.

The movie’s star, Steve Martin, was 42 years old when the movie was released. He plays Neil Page, a high-end Chicago marketing executive with a wife and three young kids, to whom he is desperately trying to return after a fruitless business trip to New York. The legendary John Candy (playing a traveling shower-curtain-ring salesman named Dell Griffith) becomes his traveling companion; they have many misadventures. You really must see this movie if you haven’t. 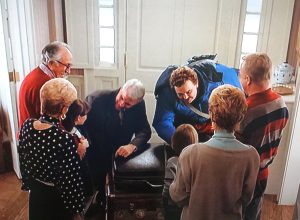 The last scene packs a powerful punch. A trip that was supposed to get him home by 9 p.m. Tuesday has lasted until dinnertime on Thanksgiving. Neil Page now returns home with the homeless Dell Griffith in tow. Awaiting him are his three kids, his relieved/angry wife, and two full sets of parents.

This time it was the two full sets of parents that struck me. When you are 42 years old and married with three little kids, you might well have the complete older generation still with you. After all, they always have been there. You have your mother and father. Your spouse has their mother and father.

But when you are 60, you are very unlikely to have the older generation with you anymore. At least not all of them. At the age of 52, I lost my mother and Jeanie lost her father. At 58, I lost my father. Jeanie’s mother is the last survivor of that generation. She is 90.

“In that cemetery lie half the family I grew up with.”

By the time you are 60, you have stood by many a grave. There is a hillside cemetery in Front Royal, Va., 600 miles from my home in Atlanta. In that cemetery lie half the family I grew up with — my mother, father and sister. Three of us survive. I reflected at my father’s funeral that when you are a child, you never imagine this childhood thing is finite and that one day half your family will live in a hillside cemetery. Because what child could bear knowing that?

I went to the American Academy of Religion meeting in late November. It was the first large throng at an AAR meeting since COVID started. I was struck by something this time: My age cohort is now the oldest generation of scholars perusing the AAR book tables and going to the presentations. Sure, there were a handful of folks who were as much as 10 or 15 years older. But not many.

Perhaps it has something to do with residual COVID fears. Perhaps active scholars much older than I am don’t much feel like going to a large conference anymore.

But it can’t be denied that in the last decade, almost everyone who played a role in educating me has died; the rest are long retired. One of my most significant mentors, Ron Sider, died this year. I can’t quite describe the sense of loss I felt.

“There just aren’t really that many people intimately involved in my life who are senior to me anymore.”

Along with the loss of my parents, I am aware there just aren’t really that many people intimately involved in my life who are senior to me anymore. My nickname in my family for a while has been “Gushee Senior,” and by now the name really fits.

The other night we sat at the dinner table with four generations, their ages ranging from 90 to 4, with a new grandchild due in January. It struck me that my mother-in-law was born in 1932, and, all going well, our grandchildren will live until around 2100. That’s a family lineage stretching 168 years, not even counting the grandparents Jeanie and I also remember, who were born around 1900.

You think about stuff like that when you are 60. You also think with an ache about how you will not live to see much of the life span of your beloved grandchildren.

Being a 60-year-old professor is an interesting spot to be in. I am in good health and my mind is still sharp. (I think. You tell me.) My profession is the relatively rare one in which — up to a certain point, which students often recognize before their professors do ± age is no obstacle to holding a job and doing it well.

But it also is true that the time horizon has shortened now. I am aware that the rotating classes, the ones I teach every three years or so, may only have a few more appearances ahead of them. It makes each class seem, to me at least, more of an event, more something to be cherished and not taken for granted.

On the public intellectual side of my work. I know that 90% of the books I will write are behind me. Two or three may have a long legacy, while the rest are long forgotten already. Probably most of the media attention and, thankfully, the controversy and Twitter wars, also are behind me. I see the field dominated by scholars 15 or 20 years younger, and some days I struggle to accept that this is just how it is and how it is going to be. On the other hand, it is quite a relief to focus on the human beings and our relationships rather than on stupid conflicts, controversies and competitions.

“I see that death is going to come for me.”

I see that death is going to come for me. Maybe not at all soon, but it is coming for me. I have accompanied too many people on that last journey to be able to deny that my turn will come.

It certainly seems to me that preparing for death is the greatest spiritual challenge most people face. But one of the cruelest things about the death of those who are very old is that this greatest of spiritual challenges comes upon people whose physical and sometimes mental powers have declined precipitously. So, at the time when the person’s greatest resources are needed, these already have eroded, and then they decline profoundly during the dying process.

In light of all this, it is clear to me that when you are 60, it is not too early to consciously begin to prepare for that last journey.

This makes me think a bit differently about gospel and church, too. When I was a young whippersnapper, I joined many others who derided traditionalist otherworldliness and focused on social transformation that could contribute to the coming kingdom of God. But at 60, I see both that the world is not going to be transformed any time soon, that I will certainly die, and that people need help preparing for death.

There are very good reasons why for two millennia the church has had much to say about how one lives in the light of death and what one hopes for after death. It should be both/and, not either/or. Pastors who spend at least some of their sermons talking about “the resurrection of the dead and the life of the world to come” should be applauded, not condemned.

Because some of the people in their congregations have experienced the shock of being 60. And older.