A major obstacle to racial justice and reconciliation is white blindness to the systemic nature of racism and the refusal to acknowledge and seek redemption for past and present oppression, a South African anti-apartheid activist said during the Baptist World Alliance annual gathering in Birmingham, Ala.

And the barrier to overcoming such ingrained and willful resistance is an idolatrous understanding of whiteness, said theologian Allan Boesak in his July 14 address to the gathering that is both in-person at Samford University and available online. 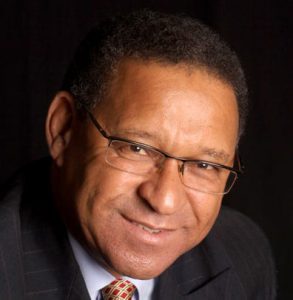 “It is so hard for white people to ask forgiveness because the sacralization of white supremacy means that white people have turned themselves into God, not just in Black eyes, but in their own eyes,” Boesak asserted.

People infused with that kind of worldview and theology naturally feel they can act without consequences or accountability to anyone but themselves, he added. “And if one is God, there can be no equality. And if we are not equal, reconciliation is not possible, and without all of these, healing and wholeness are not possible.”

Boesak’s analysis of white supremacy and white privilege derive not only from growing up Black in the apartheid era of South Africa, but from his leading role in the anti-apartheid movement alongside Nelson Mandela, Bishop Desmond Tutu and others. Boesak, a Dutch Reformed Church pastor, won the Robert F. Kennedy Human Rights Award in 1985 and is the author of Dare We Speak of Hope: Searching for a Language of Life in Faith and Politics.

Boesak shared experiences from South Africa that would sound all-too-familiar to Americans witnessing right-wing political and social media attacks on Critical Race Theory and any acknowledgment of systemic racism, especially in public education.

“We came to understand, in contrast to earlier times, that with regard to racism we could no longer speak of it in simply individual, personal — that is to say, attitudinal — terms. We understood racism in its historical, structural, systemic dimensions and manifestations, as well as the political and economic consequences of all of these dimensions,” he said.

South African activists also came to see the interconnectedness of racism and white institutions of authority, including churches and government.

“We understood more and more that race, as it was being used, is no more than a social construct designed for political control, psychological manipulation and social engineering.”

“Racism, we discovered, is all the more devastating when it is linked with power and powerlessness. Dealing with racism means dealing with power relations and domination, subjugation and exploitation,” he said. “We understood more and more that race, as it was being used, is no more than a social construct designed for political control, psychological manipulation and social engineering.”

The prophetic church in South Africa came to label racism as a sin for its denial of the humanity of non-whites and, by extension, its denial that non-whites are created in the image of God and authenticated through the incarnation of Christ, Boesak said.

Black people had become “the object of scorn and derision and subjection and ultimately of annihilation, because that annihilation is always the dead-end street were white supremacy leads us. We have learned that we cannot talk about racism without talking about white supremacy and white privilege, and how these have not just been created and maintained, but they have been sacralized.”

But the centrality of being created in God’s image cuts both ways and obligates non-whites to strive for the release of whites from the bonds of racism, Boesak said. “We cannot only fight for ourselves. Our revolution is only complete if we fight for the freedom of those who oppress us as well. Their humanity has been lost, and we have to stand up and make them see how they can recover it — and they can recover only if they stand with us in our struggle for freedom.”

However, no real healing can be achieved without the “complex and difficult” reconciliation process modeled in the story of Zacchaeus the tax collector in the Gospel of Luke, he said.

“There can be no reconciliation without equality.”

That undertaking requires acknowledgment of personal complicity and remorse in racist oppression, making financial or material restitution and restoring broken relationships. “And it requires equality because there can be no reconciliation without equality.”

For dominant groups making amends, the resultant awakening counters the deliberate denial, or “unremembering,” involved in white supremacy, he said. “Unremembering is a deliberate, calculated process by those in power to control, distort, mold, reshape and retell history so as to completely erase the memory of the oppressed so that, from that memory, there will be no tools for survival, no source of pride in achievement, no well of resilience from which to drink and no inspiration for resistance and struggle.”

Boesak ended by encouraging Christians to lean into their faith when the movement against white supremacy and white privilege becomes overwhelming.

“So, as you go back to wherever in the world you have come from, when the struggle becomes too hard and the taunts too cruel, the insults too much and the praying too deep, the helplessness too overwhelming and the darkness too intense, go to the place where Jesus went — go back to the place of your anointing. … For there is a witness to be born and God will not fail those who bear it fearlessly and faithfully.”